British Govt to Build the Most Advanced Polar Research Ship 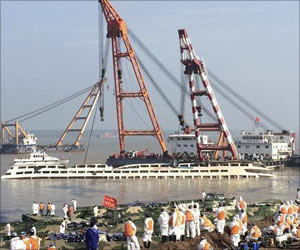 In Britain, the Minister of State for Universities and Science, Jo Johnson, announced that it is set to build a polar research ship that will be one of the world's most advanced floating labs.

The $300 million vessel, able to break through ice and despatch robotic submarines, is to be built at the Cammell Laird shipyard at Birkenhead on the Mersey river, Xinhua news agency reported.

Palliative care provision is found to be worst in Iraq among the 80 countries studied, with Bangladesh, the Philippines, Nigeria and Myanmar at the bottom five.
Advertisement

It will be the first complete ship to be built at the 187-year-old shipyard. The government said the ship will maintain Britain's position firmly at the forefront of climate and ocean research.


The decision, announced by Minister of State for Universities and Science, Jo Johnson, follows a 12 month competitive tender. The contract will create 400 jobs at the Birkenhead yard, including many new apprentices.

The shipyard is expected to start work on the contract next month and deliver the next generation polar research vessel ready for operation by 2019. It is being built for NERC, Britain's Natural Environment Research Council.

Hearing aids are the main treatment for hearing loss and it is of huge concern that audiologists will not be able to give them to all patients who need them.
Advertisement
<< Ruya Foundation Introduced Drama Therapy for People in Iraq
India may Have Over 60 Mn Cases of Osteoarthritis by 2025 >>

British surgeons hope to replicate the success of the world's first-ever effective womb transplant, conducted on a 36-year-old woman in Sweden last year.

Indian-Origin Doctor in Britain Under Probe Over Cancer Treatment