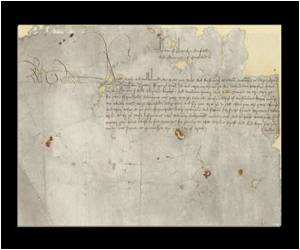 The notorious British king Richard III being referred as a "bunch-backed toad" is found to be a "complete fabrication", in Shakespearean depiction, reveal results of scans of the monarch's recently-discovered skeleton that were published Friday.

Scientists said the scans showed that Richard's spine has a "well-balanced curve" that could have been hidden under clothes or armour.

"Examination of Richard III's remains shows that he had a scoliosis, thus confirming that the Shakespearean description of a 'bunch-backed toad' is a complete fabrication - yet more proof that, while the plays are splendid dramas, they are also most certainly fiction not fact," said Phil Stone, chairman of the Richard III Society.


"History tells us that Richard III was a great warrior. Clearly, he was little inconvenienced by his spinal problem and accounts of his appearance, written when he was alive, tell that he was 'of person and bodily shape comely enough' and that he 'was the most handsome man in the room after his brother, Edward IV'."
Advertisement
Richard, the 14th great-granduncle of Queen Elizabeth II, became the last English king to die in battle when he was killed in the Battle of Bosworth Field in August 1485.

His death marked the end of the Wars of the Roses between the houses of Lancaster and York -- named after their respective heraldic symbols of the red and the white rose -- and the rise of the Tudor dynasty.

Historical accounts said his body was transported naked and bloody on the back of a pack horse to the central England city of Leicester before being buried in an unmarked grave at a Franciscan friary.

But the whereabouts of Richard's remains were the subject of a 500-year-old mystery.

His skeleton was finally discovered in September 2012 during the construction of a municipal car park in the market city of Leicester.

Archaeologists subsequently identified the bones as Richard's using DNA that matched that of descendants of the king's sister, and evidence from battle wounds and the twisted spine of his skeleton.

Source: AFP
Advertisement
<< Risk of Different Heart Diseases With Systolic and Diastoli...
Health Lobby Condemns FIFA for Lifting the Ban on the Sale ... >>

Syrian Refugee Kids Rehearse Shakespearean Plays
100 Syrian refugee kids, under a white test in the desert of Jordan, rehearse King Lear, one of the ...