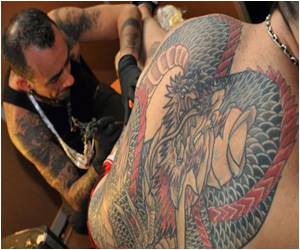 Ink Land King Body Art The Extreme Ink-Ite, who is also known as Britain's most tattooed man, has had a 3D silicone skull implanted in his chest after a three-hour operation. He is said to have spent £350 for the cosmetic surgery.

The tattoo man from Birmingham, known as Mathew Whelan before changing his name in 2009, has admitted that it hurt.

The 34-year-old, who sports a Jeremy Kyle tattoo on the back of his head and earlier spent £30,000 to be inked from head to foot, went through the procedure at city centre 'body modification studio' Birmingham Ink.


The 34 year old, who now goes by the nickname Bart, had the silicone-filled ball, sporting a raised skull motif, pushed into his chest - and in time, flesh will tighten round the lump, giving the impression of a head pushing through his skin.
Advertisement
He has also gone through scarification - a form of facial branding - and had his left eyeball tattooed.

Bart states that it will be a year before the skull can be seen beneath his chest. "It just looks like a lump at the moment," he said.

He began the three-hour-long surgery armed with only willpower, but wilted and wanted help with the pain.

"Tribes go through a lot of pain," Bart says, "you have a choice of a numbing ointment, but I started out without it. The incision wasn't too bad. I found it therapeutic in one way."

He added, "But when they started to perform the channeling, that was more of an ordeal."

That, he said, is when he needed the ointment. Bart said that there were several risk factors. His body could reject the foreign body implanted inside it.

Mr Body Art had his first tattoo at the age of 16 - a simple bulldog on his right arm. But even at infant school, he craved body art.

"I fell in love with the Maori culture at the age of nine. People call it an obsession, but it has turned out to be a lifestyle," he said.

Bart declares he will never regret the work that adorns his body, but has recently undergone laser surgery to have some tattoos taken off. That is why he has some bare flesh for new tattoos.

Bart's first television appearance was in 2011. The programme, Jeremy Kyle Show', helped him attain the status of a celebrity for his tattoos.

Temporary Tattoos Could Cause Allergic Reactions
Temporary tattoos are not risk free and could cause allergic reactions, says FDA....

New Tattoos That Create Music
A new project that allows people to make music from tattoos has been developed. The project uses ......

'Electronic Tattoo' may Help Gauge Your Health
Media reports indicate that Google is in the process of bringing out "electronic tattoo."...