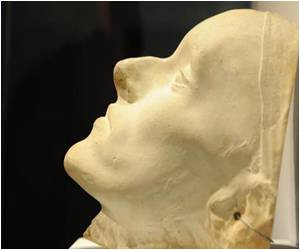 The government warned that a cast of Napoleon Bonaparte's death mask recently sold at auction in Britain could leave the country unless a domestic buyer can match the £175,100 ($280,640, 208,400 euros) sale price.

Culture Minister Ed Vaizey announced that he had deferred granting an export licence for the death mask, but that it would leave the country next year unless a buyer was found.

"2015 will see the 200th anniversary of the Battle of Waterloo and there remains a huge fascination with Napoleon here in the UK," said Vaizey.


"This is perhaps one of the most unusual objects I've ever come across, both fascinating and somewhat macabre, but I believe it should remain here, and hope a UK buyer steps forward to help ensure that happens."
Advertisement
The original mask is believed to have been made either by Italian physician Francois Antommarchi or British surgeon Francis Burton, who were both present at the death of Napoleon on the south Atlantic island of St Helena on May 5, 1821.

Two copies of this mask were given to the island's chaplain, Richard Boys, with each one bearing a note of authentication in Boys' hand.

One of the masks was kept by Andrew Boys, a descendant of the chaplain, until it was sold at auction at Bonhams in London on June 19.

The second mask is on loan to the Maison Francaise d'Oxford, a French-owned research centre.

A decision on granting a licence has been deferred until January 12, 2014, but can be extended until April 12 if there is a serious bid.

Napoleon Love Letter Seduces Bidders at Manuscript Auction
A love letter from Napoleon Bonaparte to his future wife Josephine sold for more than a quarter of ....