Brisk Business in Copacabana Gets a High Thanks to the World Cup! 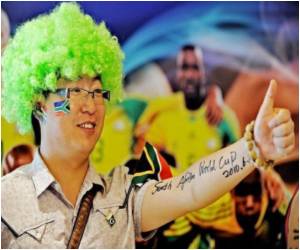 Juan de Lima, manager of the Ray e Ysarah food and drink stand, has had to hire two extra employees and extend working hours to cater to tourists all day during the South American nation's winter season.

"Even though it's winter, it's as if it were New Year's Day every day," said Lima, whose stand is next to a beach that sees one million people every December 31 for a fireworks show over the ocean.


The stalls along the beach serve non-stop orders of beer, caipirinha cocktails and "frango a passarinho," or chopped pieces of deep fried chicken.

Brazilian football star Neymar poses shirtless for a selfie with his girlfriend.
Advertisement
A fan favorite: Coconut water drunk through a straw slipped into a hole cut into the shell.

"Our best customers are the Americans. They spend without counting," he said.

At a local supermarket, manager Almir Patros said sales had soared by 19 percent in June.

"We even have problems on game day at the Maracana Stadium. We are swarmed and we quickly run out of bread, ham and cheese because people want to make cheap sandwiches," he said in front of a huge stack of beer, the most popular item during the Cup.

At dawn, delivery trucks flood the streets of Copacabana to fill the depleted stocks of local markets.

"It goes out so fast that sometimes suppliers can't keep up with orders," said Antonio da Cruz, who works at a "lanchonete," a small juice and sandwich restaurant.

"Our sales increased by 70 to 80 percent. We were often out of oranges or passion fruit because suppliers didn't deliver on time," he said.

Some of his employees work double shifts or on their days off.

"I barely sleep five hours per night, but it's worth the effort," the 67-year-old said.

Down the street, Suane Pinto said sales at her flip-flop store had surged tenfold.

"We spend almost the entire day in the store. It's a bit complicated," said the 24-year-old amid racks of thousands of pairs of the rubber and plastic footwear.

"We sell so many that we lack some sizes. The store's boss must fill the stock but were are not sure it will get here before the end of the Cup" on July 13, she said.

Nearby, a clothing store put up a sign reading "salesman or saleswoman wanted."

Two streets away, Diogenes da Silva said he had prepared for the Cup at his buffet-style "kilo" restaurant, which sells dishes by weight.

He hired extra staff, increased his stock and bought new kitchen equipment. But he had hoped for a bigger pay day.

Find a Doctor Blood Pressure Calculator Loram (2 mg) (Lorazepam) Vent Forte (Theophylline) Indian Medical Journals Drug Side Effects Calculator Daily Calorie Requirements The Essence of Yoga Color Blindness Calculator Pregnancy Confirmation Calculator
This site uses cookies to deliver our services. By using our site, you acknowledge that you have read and understand our Cookie Policy, Privacy Policy, and our Terms of Use

Brisk Business in Copacabana Gets a High Thanks to the World Cup! Personalised Printable Document (PDF)