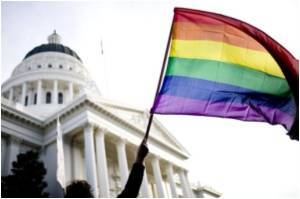 A legal brief supporting the notion that same-sex couples should have a fundamental right to marriage was signed by more than 80 Republicans.

The brief is in support of the plaintiffs in the Hollingsworth v. Perry case now before the Supreme Court, which challenges California's Proposition 8 barring same-sex marriage, reports CBS News.

The case, which will be argued starting in late March, could result in the invalidation of statewide bans on same-sex marriage across the country. It is one of two same-sex marriage cases being considered this term by the Supreme Court; the other challenges the Defense of Marriage Act, which bars federal recognition of same-sex marriage.

The American Foundation for Equal Rights, which organized the effort, said more names will be added before the brief is filed.

CBS News polling has found that a majority of Americans believe same-sex marriage should be legal, though more than six in ten said it should be left to the states to decide.

Source: ANI
Advertisement
<< Impact of Warming To Be Measured By 'Blood Test' for Corals
Unnecessary Deaths Caused By IV Fluids Used by NHS >>

Biased Policies Increase Risk of Psychiatric Disorders Among LGBTs
Lesbian, gay and bisexual (LGB) individuals, who live in states that instituted bans on ......