Researchers at Cold Spring Harbor Laboratory (CSHL) have found that a stable form of cell-cycle arrest, known to offer potent protection against cancer, also limits liver fibrosis - a condition characterized by an excess of fibrous tissue.

According to researchers, the new findings may have important implications for treating cirrhosis, a disease now considered to be irreversible. It could offer new insight into other disease states as well.


"Fibrosis is a disease of many organs-lungs, kidneys, pancreas, prostate, skin. It's possible this mechanism in the liver is relevant to fibrotic situations in other tissues," said Valery Krizhanovsky of Cold Spring Harbor Laboratory.

Krizhanovsky said that the state of cell-cycle arrest known as senescence was first described decades ago, but the phenomenon was thought to occur only in cultured cells in the laboratory.

More recent studies found that cellular senescence helps protect against the formation of tumors and aids in the response to certain anticancer agents.

To study the potential role of senescence in liver cirrhosis, the researchers examined mice treated with a liver-damaging agent.

They found that senescent cells accumulated in the livers of the mice, derived primarily from activated stellate cells.

Stellate cells are those that initially proliferate in response to liver damage and are responsible for producing the extracellular matrix, a kind of structural support for cells that is the hallmark of fibrotic scars.

"Once a lot of extracellular matrix has formed, it's very hard to clear. The material just sits there and creates an inflammatory environment," Krizhanovsky said.

The results suggest that immunostimulatory therapies might enhance senescent cell clearance and should be tested for the potential treatment of patients with liver fibrosis, especially in its early stages or following short-term exposure to liver toxins.

The study is published in the August 22nd Cell, a Cell Press publication. 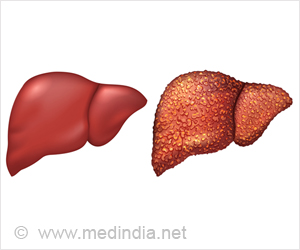