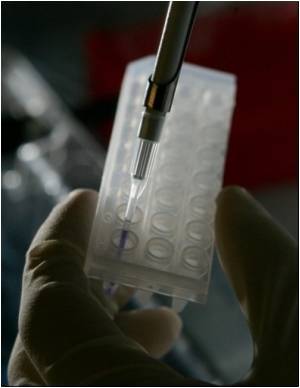 The reason why fetal stem cell transplants, once considered a promising field for treating congenital defects before birth, were failing, has been determined by researchers, who say its the mother's fault.

But mom's cells could also be the solution, according to a study on mice released Tuesday in the Journal of Clinical Investigation.

The mistake may have been that doctors were trying to match transplantable bone marrow stem cells to the fetus. The mother's immune system would recognize the new cells as dangerous and reject them.


But if stem cells that match the mother were implanted, scientists saw a near 100 percent success rate, said the study.

"This research is really exciting because it offers us a straightforward, elegant solution that makes fetal stem cell transplantation a reachable goal," said senior author Tippi MacKenzie at the University of California, San Francisco.

A structural birth defect means that a specific body part is missing or mal-formed during the embryonic development.
Advertisement
"We now, for the first time, have a viable strategy for treating congenital stem cell disorders before birth."

If the process works in humans, doctors could use it to treat a variety of inherited immune disorders which can be detected through prenatal testing, such as sickle cell disease, thalassemia, chronic granulomatous disease and others.

The advance could erase what researchers describe as a "decade-long scientific conundrum" that has caused many to lose interest in the field.

"The fact that fetal stem cell transplantation has not been very successful has been puzzling, especially given the widely accepted dogma that the immature fetal immune system can adapt to tolerate foreign substances," said co-author Qizhi Tang at the UCSF Transplantation Research Lab.

"The surprising finding in our study is that the mother's immune system is to blame."

Using a variety of mouse models for study, researchers looked at the content of the fetus's blood and found that 10 percent of it matched maternal blood cells, a higher proportion than anywhere else in the developing mouse's body.

Then they transplanted mice with blood stem cells that matched neither the fetus or mother to see what would happen.

A rush of T-cells, which protect the body from infection, surged from the mother into the fetus, forcing the rejection of the transplanted cells.

But when researchers transplanted blood stem cells that matched the mother, they process was usually successful because the mother's immune system did not recognize them as dangerous.

"Transplanting stem cells harvested from the mother makes sense because the mother and her developing fetus are prewired to tolerate each other."

Researchers hope to look next at whether the process will work in humans.