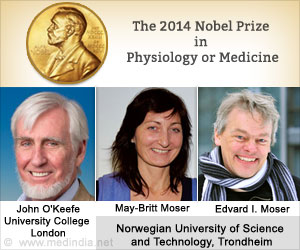 The Nobel Prize in Physiology or Medicine 2014 has been awarded with one half given to John O'Keefe and the other half given jointly to May-Britt Moser and Edvard I. Moser "for their discoveries of cells that constitute a positioning system in the brain".

Professor Goran K Hansson, Secretary of the Nobel Committee for Physiology or Medicine, announced the award. 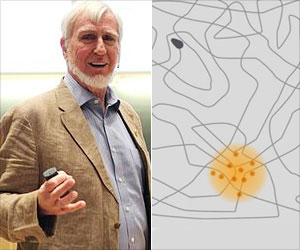 John OKeefe in 1971, discovered that certain nerve cells in the brain were activated building an inner map of the environment. 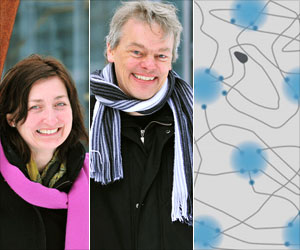 May-Britt Moser and Edvard I. Moser in 2005 discovered that other nerve cells in the entorhinal cortex formed a hexagonal grid. 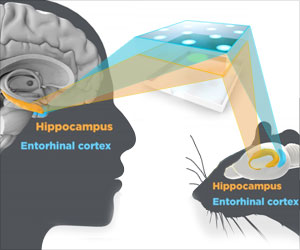 His circuitry constitutes a comprehensive positioning system, an inner GPS, in the brain.

The discovery explained how the brain recognizes where we are and is able to navigate from one destination to another.


The scientists have discovered a positioning system, an "inner GPS" in the brain that makes it possible to align ourselves in space, demonstrating a cellular basis for higher cognitive function.

"The scientists have solved a problem that has occupied philosophers and scientists for centuries - how does the brain create a map of the space surrounding us and how can we navigate our way through a complex environment?" the Nobel Assembly said.

The discovery may help explain why in Alzheimer's disease patients cannot recognize their surroundings.

In 1971, John O'Keefe discovered the first component of this positioning system. He identified that a type of nerve cell in an area of the brain called the hippocampus that was always activated when a rat was at a certain place in a room.

Other nerve cells were turned on when the rat was at other places. O'Keefe concluded that these "place cells" formed a map of the room.

More than 30 years after, in 2005, May Britt and Edvard Moser identified another key component of the brain's positioning system. They found another type of nerve cell, which they called "grid cells", that generate a coordinate system and allow for accurate positioning and path-finding.

Their subsequent study revealed how place and grid cells make it possible to decide position and to navigate.

May Britt Moser was born in Fosnavag, Norway in 1963 and holds Norwegian citizenship. She studied psychology at the University of Oslo together with her future life partner and co Laureate Edvard Moser. She got her Ph.D. in neurophysiology in 1995. She was a postdoctoral fellow at the University of Edinburgh and also working as a visiting scientist at University College London. She moved to the Norwegian University of Science and Technology in Trondheim in 1996. May Britt Moser was appointed Professor of Neuroscience in 2000 and is currently working as Director of the Centre for Neural Computation in Trondheim.

Edvard I. Moser was born in 1962 in Alesund, Norway and he holds a Norwegian citizenship. He obtained his doctoral degree in neurophysiology from the University of Oslo in 1995. He was a postdoctoral fellow together with co-laureate May Britt Moser at the University of Edinburgh and later a visiting researcher in John O'Keefe's laboratory in London. In 1996, they moved to the Norwegian University of Science and Technology in Trondheim, where Mr. Moser became Professor in 1998. He is now working as Director of the Kavli Institute for Systems Neuroscience in Trondheim.