The first frozen oocyte pregnancy in India has been reported from the Chennai-based GG hospital Fertility Research Centre. The Field of Assisted Reproductive Technology (ART) in India has truly come of age! 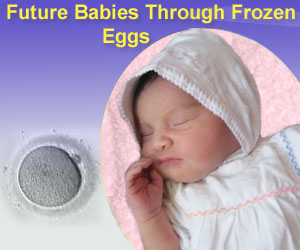 A   28-year-old woman with a bad obstetric history was selected for the special treatment. According to her doctors, a normal pregnancy, for her, was impossible. To help her savor the joys of motherhood, it was decided that a frozen donor egg would be employed and.... the rest is history.

The lady is in her first trimester of pregnancy; the success of the programme can be conclusively analyzed only after the delivery. Fetal screening tests are to be carried out, yet so far the going has been good.

'The GG Hospital takes credit for being the first hospital in south India to produce a test-tube baby. Now we are proud to announce that the first pregnancy from a frozen oocyte in India has been achieved at our fertility research centre,' Dr. Priya Selvaraj, programme coordinator, told reporters in Chennai.

The following were the steps involved in the historic pregnancy -

 Eggs were harvested from a suitable donor
 They were frozen using cryoprotectants and were then plunged into liquid nitrogen at temperatures lower than -196o degrees
 Frozen Oocytes were thawed using oocyte -specific media
 The viable oocyte(s) were then fertilized using the sperm(s) of the recipient's husband
 The resulting embryo was implanted into the recipient's uterus, after a cycle of hormonal preparation.

Several pregnancies resulting from frozen sperms and embryos have been reported from labs across India and from across the world. But pregnancies from frozen oocytes are far and few.

According to an infertility specialist with Extend Fertility, Jane Frederick, M.D, cryopreservation of oocytes is a lot more challenging because it is mostly made up of water. During freezing, dehydration takes place. This in turn results in crystallization, a process that can decrease oocyte viability on a far greater scale than in frozen sperms and embryos.

 Those who suffer from ovarian dysfunction, due to certain diseases like cancer
 Those who have pelvic diseases.
 Those with premature ovarian failure
 Those who want to postpone childbirth

A woman is as old as her egg! Egg quality is at a premium when a woman is 27 years old and begins to declines steadily. By age 42, her chances have plummeted to an all -time low and there is very little chance for her to fall pregnant. There fore it would be practical to collect egg from a woman when she is still young and freeze it for use at a much later date. Records say that the eggs can be stored for as long as 15 years.

In the west, ethical and legal complications are often integrated to ART. Couples who are entering 'splitsville' may face problem regarding custody of an embryo, as both the sperm and the egg are involved. But in the case of frozen eggs, only the woman is involved.

Although oocyte cryopreservation is futuristic, it would be wise for aspiring moms to remember that using fresh eggs would yield far greater results. Accountability is not a virtue that ART centres in India are credited with.  Besides, the impact of the manipulation at the cellular and nuclear level is shrouded, and a lot of work is still underway. Until proven beyond doubt, it would be better to 'Wait and watch'.

 First baby through oocyte cryopreservation was born in Australia, in 1986, under the supervision of Dr. Christopher Chen
 Since then, only a few hundred pregnancies have been reported the world over.
 The Indian achievement came two decades later
 Pregnancy from frozen eggs is 1.4-1.8 %.
 Successful pregnancy using 'freshly harvested' egg is 43 %
 At the G G Hospital, Chennai, of the 76 frozen oocytes, only 11 embryos were formed.
 Out of this eleven, two resulted in pregnancies. One is presently continuing, while the other was just a 'bio- chemical' pregnancy
 If an egg is collected and frozen from a woman, aged 32, it would remain at that age when it is implanted into her while she is in her 40s
 Cost of the procedure may sum up to a few lakhs

The term 'Egg Donation' is commonly used to refer to the contribution of her eggs by a woman to another, who is incapable of producing her own.

Intracytoplasmic Sperm Injection (ICSI) is an assisted reproductive technological procedure performed under a microscope, which aids in the introduction of a single sperm into the cytoplasm of an egg.

What are the best fat-burning foods? Some vegetables like spinach, mushrooms; certain nuts, legumes and lentils help burn fat.

Cut down on cost and include healthy foods in your daily diet. Cooking creatively helps you eat healthy and also within your budget.

Top ten incredible reasons why eating eggs can make you healthier and brainier. Eggs are powerhouse of nutrients packed with proteins, essential vitamins and minerals.