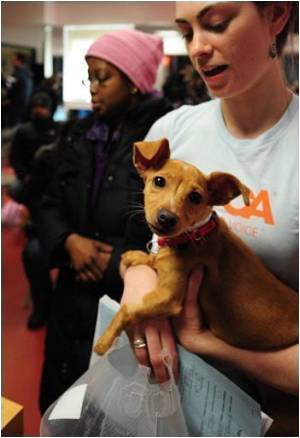 Pierre's regular medical investigation showed that he needed dialysis, and his owner did not have any second thoughts about what step to to take.

His owner, Cibele Dominigues, admitted the little white terrier for weeks of costly treatment in Veterinarian Hospital Dr. Hato, an ultra-modern animal clinic in Sao Paulo that boasts it is the best and most sophisticated in South America.

A new study has found that people with pets have the filthiest kitchen floors.
Advertisement

There he had access to a dialysis machine, a round-the-clock staff of attendants and a level of care that would be out of reach for most of Brazil's human population.


Now, Pierre "is doing fine," said Domingues, a woman in her early 20s, as she petted him in his cage and prepared to take him back home the next day.

More than 100 abandoned dogs bark and jump as if competing for the attention of their potential adopters inside the Hong Kong Dog Rescue centre.
Advertisement
The Hato family, which owns the three-year-old hospital, already has another clinic elsewhere in sprawling Sao Paulo, and is planning on building yet another. Several other rival clinics also offer much the same services.

All highlight just how well Brazil's economy is doing: making the wealthy wealthier and building a middle class which has greater resources to spend on its nearest and dearest -- which in the case of pet owners, means a growing army of pampered animal companions.

"Around 80 percent of the animals we see here are dogs. Another 15 percent or so are cats. The rest are various animals, like monkeys. We even had an iguana in the other day," said Dr Valter Yoshio Hato, one of the co-owners of the hospital built by his father.

The clean, wide hospital corridors lead into consulting rooms where owners pay 45 dollars to speak to one of 12 vets. That is around double what human patients pay state-reimbursed doctors.

There are also three operating theaters. Simple surgeries start at 30 dollars, and go up to 1,700 for more complex operations such as work on spines or to remove cataracts from eyes.

To recover, no expense is spared, and owners can even spend nights at the hospital with their pet in one of three specially appointed apartments.

There is also a 25-meter pool where dogs and other animal patients get aquatic physiotherapy -- complete with underwater treadmill -- and a dedicated team of animal washers, who blow-dry pooches and moggies to fine fluffiness.

On the way out, a 24-hour pet supermarket is on hand, filled with aisles of collars, leashes, food, cages of dogs, and tiny doggy jackets to stave off the mild Brazilian winter.

Because here, nothing is too much for owners concerned with giving their four-footed companions the best, and longest, lives possible.

One 14-year-old dog in the waiting area, covered in sores, with apparently failing eyesight and moving arthritically, had already had "11 surgeries, more or less," its female owner explained. He was back for more treatment, this time for kidney stones.

"People who have chosen not to have children, often they have a dog or a cat, a pet, to fill the void where there's no child, and because it's just like a child, people don't spare the expense, they spend," Hato explained.

That was certainly the motivation for Aline Almeida, the 28-year-old owner of Paquita, a thin-looking small dog aged 14 which had also gone in for dialysis.

Almeida's other dog had died last year of cancer, so she was making sure Paquita got all the treatment necessary.

"She's my best friend, my little friend," Almeida said, bending forward to kiss her dog on the head.

For Women There is No Difference Between Pets and Babies

A survey by insurer Petplan has found that a majority of women treat their pets in a manner similar to babies.
Advertisement
Advertisement
This site uses cookies to deliver our services.By using our site, you acknowledge that you have read and understand our Cookie Policy, Privacy Policy, and our Terms of Use  Ok, Got it. Close
×