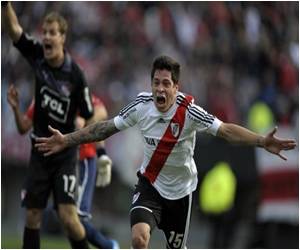 Due to the absence of cheap Chinese fakes, business is bad for shopkeeper Gloria Calves, although she is inundated with customers hunting for World Cup jerseys.

"This is the worst World Cup ever. All the others were very good. This one's terrible," says the tiny 68-year-old, whose head barely clears the countertop of her clothing store in Rio de Janeiro's teeming Saara market.

"The police don't let us earn. We risk going to prison or getting fined just for trying to do business."


Calves has reigned over the sea of green and yellow in her small store for 20 years.

Before the World Cup came to Brazil, she had a business model that was simple, lucrative and, she readily admits, illegal.
Advertisement
Instead of selling star striker Neymar's number 10 jersey for $160 -- the price of the genuine article at the Nike store -- she sold identical, Chinese-made knock-offs for $35.

The authorities turned a blind eye, clients paid a price they could afford and Calves made a nice profit. Everyone was happy.

That has changed since FIFA arrived.

Now that Brazil is hosting the World Cup, it faces pressure from football's governing body to crack down on counterfeit products.

The country had to pass a sweeping "General Law of the Cup" imposing harsh prison sentences and fines for trademark violations.

Brazil's jerseys are not linked to FIFA -- they are made by Nike, a top rival of FIFA sponsor Adidas -- but with police stepping up patrols, Calves' fakes have been caught in the same sweeping net.

After being arrested twice and sentenced to a year of community service, she decided to clean up her business.

Now she sells Brazilian-made jerseys that differ from the real thing just enough to be legal.

But she says they're low-quality, and her customers notice the difference.

"When the Chinese make a fake, it's the exact same thing," she says wistfully.

"You can turn it inside out, you can hold it up to the real one -- you can't see a single difference. It's perfection."

He lost his job at a hardware store eight months ago and landed in the counterfeit retail business. He needs the money to support his wife and 17-year-old daughter, he says.

"I know it's dangerous. You can go to prison. But what am I going to do? I have to work," he says.

Vargas, 45, says he thinks the World Cup has been bad for Brazil.

"FIFA is the one running everything. They say only they can make money," he says.

He doesn't want to break the law but feels he has little choice, he says. If he doesn't sell illegal counterfeits, his competitors will.

The market is bustling with them, despite what retailers say are increasingly frequent raids.

"When the police come, everybody closes shop and runs," says Vargas.

Not all the vendors are as open as he is.

Another man selling authentic-looking Brazil jerseys from a clothesrack set up in the middle of the street eyes his customers warily.

"Hey, what are you, a journalist?" he asks. "I don't want any journalists here. Get out of here."

Elsewhere in Saara, small-scale retailers are trying to profit from the World Cup without breaking the law.

Some are doing a brisk business in flags, noise-makers, hats, wigs and virtually anything else that can be painted in the colors of the Brazilian flag.

Others say they are struggling.

Maria Farias runs a little store that sells football T-shirts and other clothing in green and yellow.

She is careful not to break any of the rules on the "Official Licensed Products" pamphlet she got from a visiting FIFA representative and keeps in her cash register for reference.

She says she has seen no World Cup boost so far.

"People don't have money. Things are hard," says the 55-year-old.

"For us the World Cup still hasn't arrived."