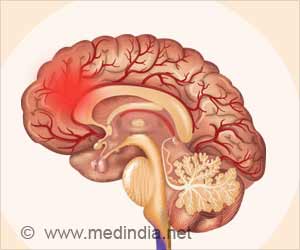 A new study has found that every 20 seconds, one Indian suffers a brain stroke or three every minute. The numbers are increasing alarmingly due to changing lifestyles.

Stroke can cause permanent disability and it is important to recognize its early warning signs to stop its progress. Early warning signs of stroke include sudden weakness of facial muscles.
Advertisement
‘Around 1.54 million Indians are affected by strokes every year and the worse is 90 per cent of stroke patients failed to reach hospital on time. ’
Tweet it Now

These revelations came at the ongoing 3-day Fourth Congress of Society of Neuro Vascular Intervention (SNVICON) Mumbai 2019, with international participation, here on Saturday.


Prominent speakers said the message was simple but alarming - that in India, the numbers of brain strokes are increasing and it would not be wrong to say they are "life-style related".Two top Bollywood actors - Jackie Shroff and Sanjay Dutt - came out in support of India's neurological fraternity to spread the message and awareness that "stroke is beatable".

Stroke is the third leading cause of death world over. Besides, it also disables the affected people, making them completely dependent on caregivers for their daily needs. Lifestyle greatly affects the chances of developing a stroke. Thus, the incidence of stroke can be brought down to a great extent by leading a healthy lifestyle. Here is a quiz that tests if you know enough about this disabling
Advertisement
Breach Candy Hospital's Senior Consultant Neurosurgeon and Interventional Neurosurgeon Dr Anil P. Karapurkar said that like a healthy heart, a healthy brain is important, for which precautions need to be taken.

"In case of a heart attack, it is either you are gone or you recover. In case of a brain stroke, you may be gone, you may recover and come to normal, or you become dependent for life," Karapurkar warned.

He explained that in case of a heart attack, there are half a dozen basic symptoms such as chest pain, breathlessness, pain in left shoulder and upper abdomen, but in case of strokes, symptoms may vary depending on which side of the brain is affected.

"Stroke is a sudden loss of function of a part of the body. It can happen out of the blue. The simple rule to follow in case of a stroke is - 'BE FAST' - Balance, Eyes, Face, Arms, Speech, Time," he advised.

If a person suffers from problems in balancing, hoarseness in voice, sudden loss of vision, drops an object, giddiness, the first thing is to rush him to hospital without wasting time.

Karapurkar cautioned that treatment for brain strokes cannot start at home and a CT Scan or a MRI Scan is necessary, and since 2015, doctors follow a protocol of CT plus angio or MRI plus angio to tackle such cases.

The neurological fraternity is now contemplating launching a massive outreach programme with family doctors and general practitioners to create more awareness about how to deal with brain stroke emergencies.

The SNVICON also saw the latest technologies being deployed for treatment of stroke. A new web device was also launched.

Some of the major subjects covered are neurovascular anatomy, understanding of cerebral artery and 3D anatomy to understand a person's condition and treatment better, 3D spine vascular anatomy as a booming field with more to come.