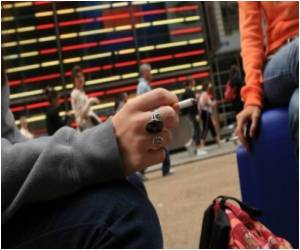 Nicotine activates the dopamine system and reward-related regions in the brain. Nicotine withdrawal naturally results in decreased activity of these regions, which has been closely associated with craving, relapse, and continued nicotine consumption.

One of the critical reward-related regions is the dorsolateral prefrontal cortex, which can be targeted using a brain stimulation technology called transcranial magnetic stimulation. Transcranial magnetic stimulation is a non-invasive procedure that uses magnetic fields to stimulate nerve cells. It does not require sedation or anesthesia and so patients remain awake, reclined in a chair, while treatment is administered through coils placed near the forehead.


Dr. Xingbao Li and colleagues at Medical University of South Carolina examined cravings triggered by smoking cues in 16 nicotine-dependent volunteers who received one session each of high frequency or sham repetitive transcranial magnetic stimulation applied over the dorsolateral prefrontal cortex. This design allowed the researchers to ferret out the effects of the real versus the sham stimulation, similar to how placebo pills are used in evaluating the effectiveness and safety of new medications.
Advertisement
They found that craving induced by smoking cues was reduced after participants received real stimulation. They also report that the reduction in cue-induced craving was positively correlated with level of nicotine dependence; in other words, the TMS-induced craving reductions were greater in those with higher levels of nicotine use.

Dr. John Krystal, Editor of Biological Psychiatry, commented, "One of the elegant aspects of this study is that it suggests that specific manipulations of particular brain circuits may help to protect smokers and possibly people with other addictions from relapsing."

"While this was only a temporary effect, it raises the possibility that repeated TMS sessions might ultimately be used to help smokers quit smoking. TMS as used in this study is safe and is already FDA approved for treating depression. This finding opens the way for further exploration of the use of brain stimulation techniques in smoking cessation treatment," said Li.

On Tobacco and Cancer Clinical Trials, AACR Releases Policy Guidance
In the United States, tobacco use is the single largest preventable cause of cancer, and smoking ......