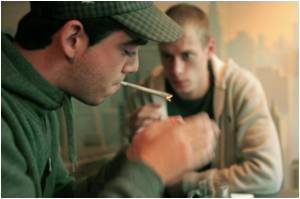 Cannabis using teenagers likely to have born with smaller than normal front part of brain, finds study. The front part of the brain controls memory and decision-making.

According to the study carried out in Melbourne, Australia, the difference in size may mean that the brain is not as effective, so children with a smaller orbitofrontal cortex could be more impulsive and less capable of carefully calculated decision-making.

In turn, this could make them more likely to experiment with cannabis, the Daily Mail reported.


Previous research has found that adults who are heavy cannabis smokers have much smaller brain volumes in this area, but it had, until now, been assumed that the damage was caused by the regular drug use.

Drug Abuse Screening Test (DAST) is a screening test to find out if you need professional help with 'Drug Abuse' problem. This is only an anonymous self test.
Advertisement
However, the new findings suggest that some people are born with the abnormality.

Initially, scientists took detailed scans of the brains of 121 children aged 12 before they had begun to experiment with alcohol, cigarettes and other drugs such as cannabis.

Once they turned 16, the teenagers were asked a series of questions, including whether they had smoked cannabis. Of the 28 who admitted to using it, 23 percent of the group, most said they had smoked it fewer than ten times.

The researchers then studied the scans again to determine whether there was anything that linked the cannabis smokers.

They discovered that the average volume of the orbitofrontal cortex was six percent smaller in the group who had used the drug. The results were the same even after adjustments for other factors, including psychiatric problems, alcohol consumption and cigarette smoking, had been made.

The study has been published in the journal Biological Psychiatry.

The human brain is exquisitely intrinsic and is the seat of all emotions. If you are curious about what makes you bad, sad, silly or glad this quiz on the brain will satiate you.
Advertisement
Advertisement