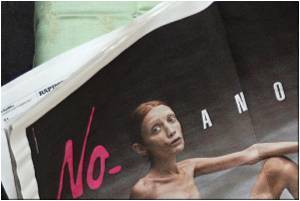 Adult brain volume, which can be reduced by Anorexia Nervosa, can be regained, a team of American psychologists and neuroscientists have found.

The research, published in the International Journal of Eating Disorders, revealed that through specialist treatment patients with this eating disorder can reverse this symptom and regain grey matter volume.


The starvation that results from this illness affects physiological systems throughout the body, including the brain, but until now it has been unclear if and when brain volume reduction can be reversed through specialist treatment.

Do you binge-eat secretly most of the time? Or do you feel so guilty after eating that you badly want to self-induce vomiting and get the food out. Check out if you are a victim of eating disorder.
Advertisement
"Anorexia Nervosa wreaks havoc on many different parts of the body, including the brain," said team leader Christina Roberto, MS, MPhil from Yale University. "In our study we measured brain volume deficits among underweight patients with the illness to evaluate if the decline is reversible thought short-term weight restoration."

The team, based at the Columbia University Center for Eating Disorders used magnetic resonance imaging (MRI) to take pictures of the brains of 32 adult female inpatients with Anorexia Nervosa and 21 healthy women without any psychiatric illnesses.

The scans indicated that when the women with Anorexia Nervosa were in a state of starvation they had less grey matter brain volume compared to the healthy women. Those who had the illness the longest had the greatest reductions in brain volume when underweight.

"The good news is that when women with Anorexia Nervosa received treatment at a specialized eating disorders inpatient unit at Columbia University which helped them gain to a normal weight, the deficits in brain volume began to reverse over the course of only several weeks of weight gain," said Roberto. "This suggests that the reductions in brain matter volume that results from starvation can be reversed with appropriate treatment aimed at weight restoration."

The team's results reveal that underweight adult patients with AN have reduced brain volumes that increase with short-term weight restoration, however important questions still remain surrounding the link between brain volume reduction and anorexia.