Brain Developments of Newborn Babies can be Tracked 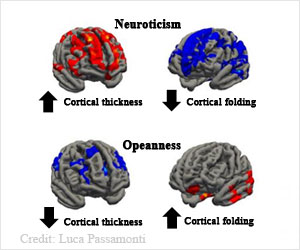 Experts can now easily study how the human brain develops as scientists have published ground-breaking scans of newborn babies' brains.

The images are part of the Developing Human Connectome Project (dHCP), a collaboration between King's College London, Imperial College London and the University of Oxford, which will uncover how the brain develops, including the wiring and function of the brain during pregnancy and how this changes after birth. The dHCP researchers are sharing their images and methods online so that other scientists from around the world can use the data in their own research.

How Does The Brain React To Craving in Addiction, Binge Eating?

Craving is the intense, urgent feeling of needing or wanting drugs is considered one of the strongest predictors of relapse.
Advertisement
‘Using Magnetic Resonance Imaging (MRI) scanners at Evelina London Children's Hospital, experts have developed new techniques which enable images of the brains of foetuses and babies to be captured.’

Using Magnetic Resonance Imaging (MRI) scanners at Evelina London Children's Hospital, the team has developed new techniques which enable images of the brains of foetuses and babies to be captured. Researchers have overcome problems caused by babies' movement and small size, as well as the difficulties in keeping vulnerable infants safe in the MRI scanner, so that they can now produce highly detailed and rich information on brain development. The project will help scientists to understand how conditions such as autism develop, or how problems in pregnancy affect brain growth.


"The Developing Human Connectome Project is a major advance in understanding human brain development - it will provide the first map of how the brain's connections develop, and how this goes wrong in disease," said Lead Principal Investigator, Professor David Edwards from King's College London and Consultant Neonatologist at Evelina London. The research collaboration is funded by a 15 million Synergy Grant from the European Research Council, and one of the goals of the project is to make sure that the data is shared as widely across the world as possible.

People who speak two languages fluently think about time differently depending on the language context in which they are estimating the duration of events.
Advertisement
Scientists are able to download the images at https://data.developingconnectome.org. For this project, Professor Jo Hajnal's team at King's College London developed new MRI technology specifically designed to provide high resolution scans of newborn and fetal brains. In addition, a group led by Professor Daniel Rueckert at Imperial College London developed new computer programs to analyse the images. "We have been developing novel approaches that help researchers by automatically analysing the rich and comprehensive MR images that are collected as part of dHCP," he explained.

At the University of Oxford, Professor Steve Smith's team has been developing specific techniques to define where the connections are in the developing brain. As well as studying more babies, the team at Evelina London are now recruiting pregnant mothers for foetal scanning. Meanwhile, the first release of images will allow scientists to start to explore these powerful images and begin mapping out the complexities of human brain development in a whole new way.

When Students Pay Attention in Class, Their Brains are in Sync With Each Other

Social dynamics matter, even when people are just listening to the same lecture or watching the same video.
Advertisement
<< Consuming Painkiller Daily Ups Heart Attack Risk
Doctor Prescribe Unnecessary Antibiotics To Half Of All Pat... >>

How Can Changes in the Gut Microbiota Alter Brain Structure?

Alterations in the gut microbiota may feed back into sensory brain regions, altering the sensitivity to gut stimuli, a characteristic of irritable bowel syndrome.

Loram (2 mg) (Lorazepam) Sanatogen Blood Pressure Calculator A-Z Drug Brands in India Calculate Ideal Weight for Infants Accident and Trauma Care The Essence of Yoga Find a Hospital Blood Donation - Recipients Sinopril (2mg) (Lacidipine)
This site uses cookies to deliver our services. By using our site, you acknowledge that you have read and understand our Cookie Policy, Privacy Policy, and our Terms of Use