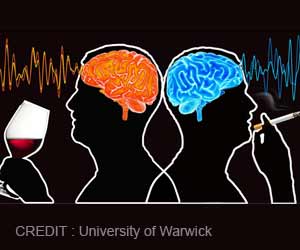 New study identifies different brain areas associated with smoking and drinking which could help in both the prevention and treatment of alcohol and nicotine substance abuse, reports a new study.

Smoking kills the smoker silently, pushing him towards serious illnesses, which slowly lead to death.
Advertisement
‘Identifying the brain regions that are linked to smoking and drinking could help in both the prevention and treatment of alcohol and nicotine substance abuse, reveals a new study.’
Read More..
Tweet it Now


A new study by Professor Jianfeng Feng, Professor Edmund Rolls from the Department of Computer Science at the University of Warwick, in collaboration with Dr. Wei Cheng from Fudan University, China, examined the neural mechanisms underlying two key types of substance use behavior, smoking and drinking.

Smoking causes many diseases and affects the overall health of smokers.
Advertisement
In 2000 participants they found that smokers had low functional connectivity in general, and especially in the lateral orbitofrontal cortex, a region of the brain associated with impulsive behavior. This suggests that people who smoke may do so to increase their overall brain connectivity with the stimulating effect of nicotine, and that being impulsive may be a factor leading to smoking.

Drinkers of alcohol had high overall brain connectivity, especially in the medial orbitofrontal cortex, a region implicated in reward. It is suggested that the high connectivity of this reward-related brain region may be a factor in attracting some individuals to alcohol.

Importantly the extent of these functional connectivity changes in the brains of drinkers and smokers correlated with the amount of alcohol and nicotine being consumed. Critically they were even detectable in individuals smoking only a few cigarettes or drinking one unit of alcohol every day.

Another key discovery is that it was possible to relate the connectivity at age 14 to who would smoke or drink at age 19. This opens up the issue of causality in addiction.

Professor Edmund Rolls, from the University of Warwick's Department of Computer Science, comments: "These discoveries help to show that there are different neural bases of different types of addiction, and that the orbitofrontal cortex, a key brain region in emotion, is implicated in these two types of addiction."

Professor Jianfeng Feng, from the University of Warwick's Department of Computer Science, comments: "These findings could have important public health implications, as both drinking and smoking affect a large population worldwide. According to a WHO investigation, there are over 1.1 billion people who smoke tobacco in the world, and more than 7 million people die each year due to the use of tobacco. As well as 2.3 billion people worldwide who are currently drinkers, with more than a quarter of all 15-19 year old teenagers drinking. More than 3 million people die as a result of the harmful use of alcohol each year.

"These are key discoveries that advance our understanding of the neurological bases of smoking and drinking and also provide new evidence on the different neurological mechanisms that are related to these two types of human addictive behavior, smoking, and drinking, and these advances have implications for prevention and treatment of these two substance use."

Alcohol use disorder or alcoholism is an inability to control drinking. It can cause short term and long term physical, as well as psychological effects on the patient.
Advertisement
Advertisement