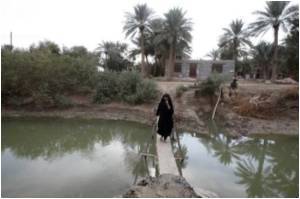 New research suggests that a high number of Iraqi refugees are affected by brain and nervous system disorders, including those who are victims of torture and the disabled. The late-breaking research will be presented at the 63rd Annual Meeting of the American Academy of Neurology, April 9 - 16, 2011, in Honolulu.

The United Nations estimates that there are several thousand Iraqi refugees living in the United States and the number is rising yearly.

During their first outing since getting engaged in December, Haidar al-Saeedi and his fiancee dangled 55 metres (180 feet) over Baghdad, enjoying the view from a Ferris wheel that
Advertisement

"There are an estimated 40 million displaced refugees worldwide and the number of Iraqi refugees continues to grow due to conflicts in the Middle East," said Farrah Mateen, MD, with the Departments of Neurology and International Health at Johns Hopkins University in Baltimore and a member of the American Academy of Neurology. "Our study presents the first results of a large national pilot project by the United Nations to monitor neurological disease in displaced people."


In Jordan in 2010, the United Nations (UN) reported that there were 36,953 registered Iraqi refugees and asylum seekers with 7,621 of those receiving health assistance.

Iraq Ministry of Public Health has reportedly urged the government to ban all toy weapons over fears of making children violent at an early age.
Advertisement
For the study, researchers used a UN database in Jordan. A total of 1,295 refugees were reported to have a brain or nervous system disorder, or four percent of all registered Iraqi refugees. Of those, 10 percent were disabled.

Neurologists were involved in 14 percent, or 179, of these cases and health education was available to about 11 percent of refugees with brain disorders.

Faced with renewed threats by Al-Qaeda and still mourning a church massacre, Christmas for Iraq's Christian community will this year be a time of fear and cancelled celebrations rather than rejoicing.
Advertisement
<< Health Costs Could Bring Financial Crisis to Advanced Econo...
Dyskinesia's Involuntary Movements May End With Investigati... >>

Drug Side Effects Calculator Diaphragmatic Hernia Turmeric Powder - Health Benefits, Uses & Side Effects The Essence of Yoga Blood Donation - Recipients Iron Intake Calculator How to Reduce School Bag Weight - Simple Tips Noscaphene (Noscapine) Blood - Sugar Chart Sinopril (2mg) (Lacidipine)
This site uses cookies to deliver our services. By using our site, you acknowledge that you have read and understand our Cookie Policy, Privacy Policy, and our Terms of Use