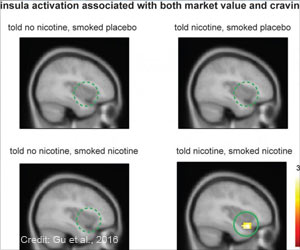 The brain's response to nicotine depends on the smoker'd belief about the nicotine content in a cigarette, according to a new research from the Center for BrainHealth at The University of Texas at Dallas.

The study found that smoking a nicotine cigarette but believing that it lacked nicotine failed to satisfy cravings related to nicotine addiction. Contrary to their expectations, researchers found that in order to satisfy nicotine cravings, smokers had to not only smoke a cigarette with nicotine but also believe that they were smoking nicotine.

Researchers have always wondered how nicotine fosters addiction in individuals.
Advertisement
‘Neural activity in the insula cortex, a region of the brain associated with drug cravings and addiction. ’

"These results suggest that for drugs to have an effect on a person, he or she needs to believe that the drug is present," said Dr. Xiaosi Gu, assistant professor in the School of Behavioral and Brain Sciences and the study's lead author.


The scientists used functional magnetic resonance imaging (fMRI) to capture neural activity in the insula cortex, a region of the brain that plays a role in diverse functions such as bodily perception and self-awareness. The insula cortex is also associated with drug cravings and addiction, Gu said.

51% of labels on e-cigarette liquid nicotine containers from 16 North Dakota stores don't accurately reflect the levels of nicotine found in the products.
Advertisement
Twenty-four chronic, nicotine-addicted smokers participated in the double-blind study. Over four visits, participants were twice given a nicotine-containing cigarette and twice a placebo. With each type of cigarette, they were once accurately told what type they had and once told the opposite.

"We examined the impact of beliefs about cravings prior to and after smoking while also measuring neural activity," said Gu, who also serves as the head of the Computational Psychiatry Unit at the Center for BrainHealth.

Each visit, participants underwent an fMRI scan and were administered a cigarette, but each visit tested a different condition: After smoking the provided cigarette, participants completed a reward learning task while undergoing fMRI. They rated their levels of craving before smoking the cigarette and after the task.

The fMRI scans showed significant neural activity that correlated to both craving and learning signals when participants smoked a nicotine cigarette and believed its nicotine content was genuine. However, smoking nicotine but believing it was a placebo did not produce the same brain signals.

Results from this study support previous findings that beliefs can alter a drug's effects on craving, providing insight into possible avenues for novel methods of addiction treatments.

The study is published in Frontiers in Psychiatry.

Interaction Between Marijuana and Nicotine is Complicated Due to Different Mechanisms

The size of the hippocampus - an area of the brain associated with memory - is significantly smaller in both marijuana users and marijuana plus tobacco users.
Advertisement
<< Graded Aerobic Treadmill Testing in Kids, Teens With Sports...
"Value Harnessing" Approach can Curb Unhealthy Dietary Pract... >>

Nicotine Sale Has Now Been Banned in Chandigarh

The decision to ban nicotine in the Union Territory of Chandigarh came to light on May 26 when the Punjab and Haryana High Courts were informed in this regard.