Boyfriend Witness on the Webcam To Girlfriend's Murder 11,000 Miles Away 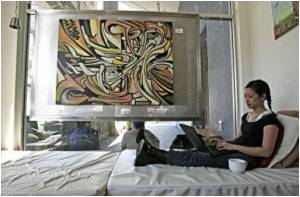 A Chinese student, Qian Liu, who was murdered in her York University Village bedroom in Toronto, Canada, was attacked when she was engaged in an online video chat with her boyfriend in China, Toronto Police have said.

Police are now attempting to retrieve the webcam images after the unnamed boyfriend said that there had been a knock at the door during their conversation at around 1 a.m. on Friday morning.

The ebullient Foxy Knoxy has been brought to the ground at last. She has been sentenced by an Italian court to 26 years in prison for her role in the murder of her flatmate Meredith Kercher.
Advertisement

"She opened the door to a male. She could have known the male, but he was unknown to the online witness," the Telegraph quoted Detective Sergeant Frank Skubic from Toronto Police, as saying.


The suspect allegedly asked to use her cell phone and a violent struggle ensued, part of which was witnessed by Liu's boyfriend until the computer was shut off.

A new study profiling the mothers who commit neonaticide, found the number of newborns in France killed within 24 hours of birth is at least five times higher than official statistics suggest.
Advertisement
The boyfriend had tried to raise an alarm with Liu's friends at the university through several social networking websites, but police only arrived at the scene ten hours later to find her semi-naked body.

"The online witness became concerned and contacted several people known to the deceased here in Canada, and appealed to them to go and track down her welfare," Skubic said.

Liu was found naked from the waist down, but police said that there were no obvious signs of sexual assault. The cause of death is yet to be announced.

Meanwhile, Liu's flatmates said that the suspect, described as white, in his 20s and six feet tall, had been pursuing her romantically.

Nepal Court Due to Give Its Verdict on 'Himalayan Viagra' Murders

A court in Nepal is all set to give its verdict in the case involving 36 villagers who are charged with a series of gruesome murders.
Advertisement
<< Try the 'Seaweed Shake' for Effective Weight Loss
Brain Illness Affected Stalin's Actions >>