Boy With a Rare Disease That Covered Him in Blisters, and Burns Fights For Life 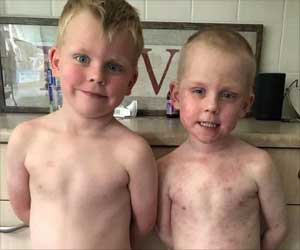 Five-year-old Ollie Williams went down suddenly by a rare disease called Stevens-Johnson syndrome this May. This disease caused a sudden outburst of blisters and rashes that covered his skin within an hour.

Doctors had no choice but to put him in a coma for two weeks as his condition deteriorated and his eyes fused shut. As per Ollie's mum Carly, he was 'treated as if he had had acid thrown at him' and had to undergo several skin grafts to save his life.she even said 'wrapped up like a mummy' in bandages from head to toe, leaving him unrecognizable.

Stevens-Johnson Syndrome
Advertisement
‘The doctors were shocked to encounter this rare disease. Only two nurses and a doctor had seen other cases similar to this before. According to others said it was something they would learn about in a textbook but probably never come across it.’
Read More..
Tweet it Now


Medics are still unaware of the cause that triggered the disease lead to a collapsed lung, 'twisted' heart and left him unable to walk without the help of a frame.


The mother of five Ms. Williams, from Newbury, Berkshire, said: 'It was the worst time of my life. 'We genuinely did think we were going to lose our son. 'I just can't get my head around it just happening out of the blue. 'He was a perfectly healthy boy, and in the space of a few hours, he was left fighting for his life. Ms. Williams noticed something was wrong when her son spat out his favorite McDonald's meal. She then carried him to the sofa and noticed a small red rash behind his ear. 'It was incredibly scary,' she exclaimed. 'I could see the blisters developing in front of my eyes.'

High Risk of Recurrence for Those Hospitalized for Stevens-Johnson Syndrome

A new study has found that individuals who are hospitalized for skin conditions of Stevens-Johnson syndrome and toxic epidermal necrolysis may have a higher risk of recurrence
Advertisement
Ms. Williams was told it was a 'viral infection' and was asked to treat him with Calpol when she called the hospital. It wasn't until next morning Ollie was rushed to Basingstoke hospital and immediately put into an induced coma. Ollie is currently at home two months after the ordeal but is scarred for life. He was atlast discharged from hospital on May 29. He did not start school yet. He is learning to wake once again using the frame and has frequent physiotherapy visits. Ms. Williams said: 'He has been referred for physio to our local hospital to start sessions with them. 'He really is our miracle, son.' Stevens-Johnson syndrome is a disorder of the skin and membranes, which is usually triggered by an infection or medication.

Do you know which doctor should you consult if you have Steven-Johnson Syndrome. This and other commonly asked questions about this condition.
Advertisement

Rare or orphan diseases are least understood of all chronic diseases. They are more common than projected and ...

Boy With a Rare Disease That Covered Him in Blisters, and Burns Fights For Life Personalised Printable Document (PDF)