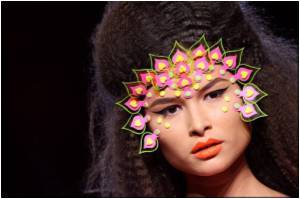 Designing with the planet in mind is the mantra of the dozens of designers who showcased their spring/summer collections at the Ethical Fashion Show in Paris this weekend, just before the official Fashion Week kicks off on Tuesday.

Talking about the gloomy side of glittering fashion industry, supermodel Amy Lemons revealed that when she was a model, her agent asked her to eat one rice cake a day.
Advertisement

"Being ethical is harder work," Isabelle Quehe, who founded the event seven years ago, told AFP. "You have to source your fabrics, find people to work with, sometimes train them in their countries of origin," she said.


"But there are far more ways of designing ethically today than when the show was created," as new green fabrics arrive on the market, from alpaca in Latin America, to recycled plastics, polyester or junk materials, said Quehe.

Fashionistas can now make a bright fashion statement - by donning a LED-studded fabric that gets lit up by wearer's own movements.
Advertisement
To a soundtrack of tropical birdsong and pattering rain, Paqocha from Ecuador showed a body-hugging catsuit of macrame-like alpaca knit, while Esther Casto updated Peruvian tradition with bat-wing ponchos in green and caramel.

Creating beauty from junk, Berlin designer Stephan Hann stitched old photo negatives into a honeycomb of black loops for a dramatic body-sculpting dress, and layered disks of scrap into a peacock-feather motif skirt.

Fur even got a look-in in one of Hann's dresses, made from printed leopard-skin vinyl panels, while a spectacular bridal gown had a trompe l'oeil train made with puffed balls of reused old shirts.

Hosted at Paris' new City of Fashion and Design on the River Seine, the Ethical Fashion Show's four days of catwalks and round-table debates are one of a string of green-minded events gaining momentum on the global fashion scene.

Green fashion events have long existed on the London fringes, but it was the first time the British Fashion Council cleared a slot on its official schedule to showcase a selection of creators with a conscience.

Eco-awareness has reached Italy too, where Giorgio Armani has started using recycled polyester, Fendi has a bag line made of reused tyres and rugs and Marni has made tyre-rubber bangles, according to Fashion Illustrated weekly.

Quehe believes the Paris fashion scene -- which "still sees ethics as unfashionable" -- is lagging behind its rivals in cleaning up fashion's act.

For Sylvie Benard, head of environmental matters at the French luxury giant LVMH, "luxury and sustainable development are compatible."

She admits few large fashion houses have made ethics or the environment visible priorities -- "because what counts is the beauty of the product" -- but argues that the high end of fashion is inherently sustainable.

"Real luxury is about products that last, that are passed down from generation to generation -- and which are made in excellent labour conditions, sometimes using artisan techniques that would be lost if it were not for haute couture," she said.

Fabrics and techniques aside, there is a social side to most of the Paris show designers' work, too, like Mayte Alorcon from Peru who employs single mothers to stitch her upmarket alpaca shawls and ponchos from home.

Also from Latin America, Lima-based designer Susan Wagner paid inmates in a prison outreach programme to produce a line of bags inspired by pre-Colombian woven motifs, updated for the 21st-century.

And Cyclus, a Colombian firm that creates urban men's bags from inner tubes recovered from garages across Bogota, makes a point of giving secure, full-time contracts to its workshop staff in the city.

"We are trying to preserve our values as we grow," said Aude Helias, one of five parters in the venture.

For Cyclus, as for many ethical designers, that means working with selected small stores -- rather than big retailers.

"It's tempting at first, because a big store will order 1,000 items in one go," said Helias. "But they can reject a batch of bags for a tiny fault, and destroy a whole chain of values at the push of a button. I've seen it happen."

British scientists have grown liver cells out of stem cells from human skin, boosting hopes that healthy cells can be transplanted into organs to repair damage from diseases like cirrhosis
Advertisement
Advertisement
This site uses cookies to deliver our services.By using our site, you acknowledge that you have read and understand our Cookie Policy, Privacy Policy, and our Terms of Use  Ok, Got it. Close
×