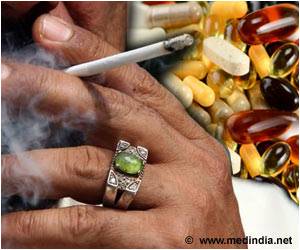 During operations, both smokers and those exposed to passive smoke require more anesthetic and painkillers as compared to non-smokers, shows a new research. The findings by Erdogan Ozturk and colleagues from Bezmialem Vakif University, Istanbul, Turkey, suggest that nicotine could affect the metabolism of anesthetic drugs in the liver, or may desensitize of the some nerve cells that sense pain.

In this new study, the authors investigated whether there is a difference among smokers, passive smokers, and non-smokers in terms of intra-operative anesthetic and painkiller consumption.


A total of 90 women undergoing total abdominal hysterectomy were enrolled in the study.

"The amounts of anesthetic and painkiller required to ensure equal anesthetic depth in similar surgeries was higher in active smokers and passive smokers compared to non-smokers," the authors said.

The research was presented at Euro-anesthesia meeting in Berlin, Germany.

Indian Bidi Industry Risks the Health of Smokers and Bidi Workers too
Bidi smoking increases the risk of cancer, while continuous exposure to tobacco dust, many cause respiratory diseases, skin diseases and postural problems.
READ MORE
'Motivational Interviewing' can Help Smokers Quit Tobacco Consumption
It aims to produce changes in patient's behavior and make them see tobacco as something disagreeable, thus helping them to kick the habit.
READ MORE

Daily Smokers Were 60% Less Probable to Vote Compared to Their Non-Smoking Peers
The stigma associated with smoking may create social withdrawal or feelings of depression among smokers which keep them away from voting.
READ MORE

General Anesthesia
General anesthesia is treatment with medications that induce a state of deep sleep and unconsciousness in the patient in order to be pain free during surgery.
READ MORE

Local Anesthesia
Local anesthesia is a type of anesthesia generally used to block pain sensation only in a specific area of the body that needs to be anesthestized.
READ MORE