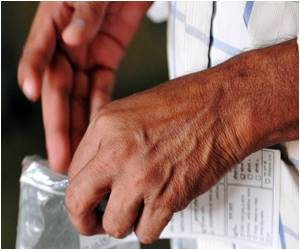 Richard Mangino, 65, lost his arms below the elbows and his lower legs from an infection in 2002. After a 12-hour operation by a 40-strong surgical team at Brigham and Women's Hospital -- best known for pioneering face transplants -- he got donated hands.

In his first remarks, he thanked the family of the donor.

"My family and I grieve for the loss of your loved one. I am humbled and overwhelmed with emotion. Thank you for this incredible gift," he said in a statement.

But Mangino said his main emotion now was happiness at the prospect of regaining a more normal life and, above all, the ability to play with his grandchildren.

"The one miracle I have prayed for, since my oldest grandson Trevor was born, was to be able to feel the sense of touch again. To touch his and Nicky's little faces, and stroke their hair, and to teach them to throw a ball. To me, that would be a miracle," he said in the statement.

"And today, my miracle has come true. And I am eternally grateful."

The father of three had until now used prosthetic limbs and had some success in living a normal existence, reportedly driving a car, playing guitar and using a computer.

However, those achievements were not easily managed. He told thebostonchannel.com that the loss of one limb requires a person to use a quarter to a third more energy.

"So if you lose four limbs, then you can imagine: one of your days is like two days for me," he said.

"Just getting dressed before was a mountain. All those things I've been doing for the past nine years -- people would say you are a miracle. And I would tell them it took 25 or 30 miracles a day to be that person. And now I won't have to perform miracles now just to get up in the morning," he told New England Cable News Friday.

Only 21 double hand transplants have previously been made around the world, with the first in the French city of Lyon in 2000, according to the International Registry on Hand and Composite Tissue Transplantation.

Simon Talbot, the lead surgeon, told MSNBC television that "the results so far have been an amazing success."

However, Mangino needs months of therapy and it will take at least half a year for him to regain a sense of touch, the surgeon said.

Organ and tissue transplantation can give a second chance at life to thousands of people. Learn more about this interesting procedure.

Media reports indicate that a fire victim, who lost the use of both his hands, has undergone the most radical double hand transplant yet attempted.

First Hand Transplant in California is a Success

The first hand transplant surgery carried out in the US at the Ronald Reagan UCLA Medical Center has been successful.