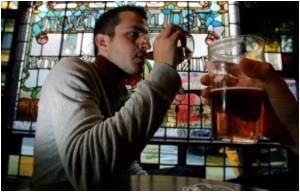 United States Drug Testing Laboratories (USDTL) has launched two new tests - one for fingernails and the other for hair - which can report a donor's alcohol exposure for the past 90 days reliably.

Maharashtra government has revealed that it is mulling a law that could see offenders lose their license if they drive when drunk above the maximum limit.
Advertisement

"For the first time, we have a tool that provides direct evidence of alcohol exposure with an approximate dosing history," said USDTL President and Scientific Director Douglas Lewis.


"Nail samples are the preferred specimen over hair samples since fingernails show no gender bias. Because cosmetic treatments destroy the presence of some drugs and biomarkers in hair, many women are not able to provide a valid sample," said Lewis.

USDTL developed the tests for practitioners who are interested in a clinical diagnostic when alcohol may contribute to a health condition.

While New Year's Eve may be the most pleasant night for many, emergency servicemen in Britain were not lucky enough to enjoy it.
Advertisement
<< Is Your Car Not Starting? Maybe You're Too Drunk to Drive!
Entrepreneurial Success Lies in Common Sense >>

If you think you know how much time it takes for you to recover from alcohol's influence, you are wrong.

Half of All Drunk Drivers Miscalculate Booze Recovery Time

If you think you know how much time it takes for you to recover from alcohol's influence, you are most probably wrong.
Advertisement
News A-Z
A B C D E F G H I J K L M N O P Q R S T U V W X Y Z
What's New on Medindia