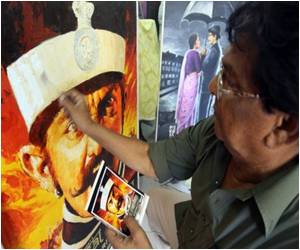 The milestone will be marked with the release of "Bombay Talkies", made up of short commemorative films by four leading directors, while India will be honoured as "guest country" at next month's Cannes festival.

Exhibitions in the capital New Delhi are showcasing a century of cinema, including onscreen kissing scenes that originally fell foul of the censors.


It is also a time for reflection on how the industry has evolved, from its early screen adaptations of Hindu mythology to the garish romantic escapism of modern blockbusters.
Advertisement
Commercially, cinema is thriving: India produced almost 1,500 movies last year and the industry is expected to grow from $2 billion to $3.6 billion in the next five years, according to consultancy KPMG.

Leading the way is Hindi-language Bollywood, which took the "B" from its home in Bombay and won the hearts of movie-mad Indians.

But old-timers complain that it has become superficial, neglecting to deal with pressing social concerns of the age.

"There's a dumbing down that has taken place in the content. I think we are suffering from what is called the narrative crisis," said veteran director and producer Mahesh Bhatt.

He contrasts modern filmmakers with Dhundiraj Govind Phalke, known as the "father of Indian cinema", who brought the first all-Indian feature film to the silver screen in Bombay (now Mumbai) on May 3, 1913.

A tale from the Hindu epic Mahabharata, "Raja Harishchandra" quickly became a hit despite its female characters being played by men -- women acting was still widely frowned upon.

Phalke made more than 100 films until his silent style fell victim to "talkies" in the 1930s, but the advent of sound technology allowed India cinema to flourish.

Bollywood plotlines today can involve stars breaking into song, often in picturesque far-flung locations, apropos of nothing -- a style that may bemuse a Western audience, but one that helps to set Indian cinema apart.

"If it was exactly the same thing as Hollywood, Hollywood would have run us over. We don't have that money," said film critic Anupama Chopra.

For her and many others the "golden age" of cinema was the 1950s, when movie greats emerged such as Satyajit Ray, India's most renowned filmmaker, who hailed from the alternative film hub of West Bengal.

It was the era of newly independent India, searching for an identity and producing films such as Mehboob Khan's 1957 hit "Mother India", which combined social concerns with popular appeal.

The 1970s and 80s saw a growing commercialism with the rise of the "masala" movie -- a family entertainer that typically mixed up romance and action, songs and melodrama, a comedy touch and a happy ending.

Parallel Cinema continued to focus on realism, with films such as Mahesh Bhatt's "Arth" (Meaning) in 1982, a gritty tale of an extramarital affair that presented strong female characters.

It was a path-breaker in a decade described as the "dark ages" of Hindi cinema, which struggled with the advent of colour television, rampant piracy and dependence on the Mumbai underworld for funding.

Things improved after India's economy opened up in the early 1990s, and again a decade later when filmmaking won formal "industry" status. Both steps encouraged foreign firms, such as Fox and Disney, to invest in Bollywood.

But subsequent leaps in technology have not been matched by advances in storytelling, say critics, who lament the formulaic plots, passive roles for women and the copying of Hollywood.

But with ever more TV shows, the Internet and easily available global films, such movies may no longer meet the demands of the educated middle-class.

This expanding group "wants to see something better than trash which caters to the common man who drives auto-rickshaws. They want to see a different kind of cinema," said veteran actor Rishi Kapoor.

A new crop of experimental filmmakers has started to appear, such as "Hindi indie" darling Anurag Kashyap who is a fixture on the global film festival circuit.

Raj Nidimoru is co-director of upcoming "Go Goa Gone", one of India's first zombie films, and he believes the move away from staple Bollywood is only just beginning.

"This is just a ripple right now, it's going to become a wave."

Big Fat Bollywood Wedding Finds Favor With Many Indians
The idea of having a Bollywood style wedding appeals to many Indians....

World of Fashion, Bollywood Join Hands Against Cervical Cancer
Famous personalities from the world of fashion and Bollywood unite together to fight against ......