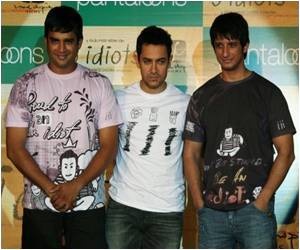 India's Bollywood industry is thoughtfully considering its Asian adversary China as a latent market, after the success of '3 Idiots', the coming-of-age comedy starring Aamir Khan.

The 2009 film, about a group of struggling students at one of India's elite universities, opened in China in October and takings have so far topped 160 million rupees ($2.9 million), according to producers Vinod Chopra Films.

In a unique intiative, the Pearls Broadcasting Corporation Ltd. has announced the creation of a platform to work for the rights of women, and to prevent them from being harrassed or
Advertisement

"The Chinese audience identified with the societal and parental pressures on today's generation of young students seeking success," said Vinod Chopra, who helped to adapt Chetan Bhagat's novel "Five Point Someone" for the big screen.


The writer-producer-director said he was already receiving enquiries from China for his next film "Ferrari Ki Sawaari" (A Ride in a Ferrari), which is due for release at the end of April.

As teams prepare for the cricket World Cup in India, Sri Lanka and Bangladesh, some of the game's greatest players are gearing up for an appearance of a different kind -- in a new Bollywood film.
Advertisement
He and other industry figures said he hoped the success of "3 Idiots" would see more Hindi-language films released in China, where only a handful of foreign movies are allowed to be shown each year.

"This has demonstrated that universal themes will cross cultural and linguistic boundaries," Chopra added in emailed comments to AFP.

Indian films were popular in China in the 1940s and 1950s but ties between New Delhi and Beijing became frosty, not least because of India's granting of asylum to the exiled Tibetan spiritual leader the Dalai Lama.

The two countries also fought a war in 1962 over disputed border territory.

The first Hindi-language film to be shot on location in China -- "Chandni Chowk to China" -- was released in India in 2009 and was hailed as a breakthrough, although panned by critics and audiences.

The action comedy about a lowly Indian chef in New Delhi who is mistaken for the reincarnation of a fabled Chinese warrior starred Akshay Kumar and "Kill Bill" actor Gordon Liu.

Before "3 Idiots", only the 2010 Shah Rukh Khan-starrer "My Name Is Khan" has recently been shown in China.

Meenakshi Shedde, a Mumbai-based film critic and film festival consultant, said Bollywood had largely ignored the potential of China and other Asian countries in favour of courting the Indian diaspora in the West.

But she said that Indian film-makers and studios were now looking east.

"I'm 100 percent sure of it. It's just a matter of time... We have a one-billion-strong population and the whole world is looking at us. But we've never looked at these markets in Asia." she added.

"China, which also has a one-billion-plus population, is the biggest market. But we've never crossed-over consciously. The market is too big to be ignored."

Hollywood studios have been making inroads into Indian cinema in recent years, forging joint ventures with local partners for pre- and post-production work.

Some Chinese film-makers have also started to realise the need to win new audiences and have adapted movies to draw in crowds from non-traditional markets like India.

Shedde noted that both "Chandni Chowk" and "My Name Is Khan" were produced or distributed by US studios (Warner Bros and Fox), which could provide the key to unlocking the Chinese market for Bollywood in the future.

"It's Hollywood opening doors for Bollywood in China. We're riding on Hollywood's coattails," she added.

Former chairperson of the Censor Board and veteran actress Asha Parekh on Saturday said that rather than the Government department, parents should do the job of keeping children
Advertisement
<< New Practice Model Could Slash Miscarriage Post Assisted Rep...
Use of Non-Surgical Options for Abdominal Gunshot and Stab W... >>