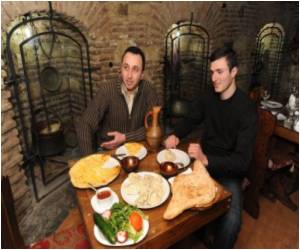 Carpaccio, sprinkled with Parmesan and topped with baby Swiss lettuce is a popular menu item in one of La Paz's most exclusive French restaurants.

But it may surprise the diner to learn the tender, thin slices of raw meat are not beef or fish -- but llama.

Llama meat, a traditional part of Andean indigenous cuisine, has recently made the leap into the most prestigious kitchens in Bolivia, and its high protein, low-fat content could soon make it into a prominent dish on menus of Bolivia around the world.


In many of Bolivia's five-star hotels llama meat has been going down a treat with tourists who praise both the flavor and the health benefits.

For a perfect meal, experts say, pair it with quinoa, the grain of the Andes, another Bolivian staple that has made a splash in international cuisine.
Advertisement
For years, indigenous Bolivians have enjoyed llama meat, butchered and sold in local markets and cooked by street vendors.

"Llama meat is very good for the health, it's healthy, the meat has less fat than cow," said Wilma Mamani, a butcher at a street market in the mining city of Oruro, 3,700 meters (12,000 feet) above sea level in the Bolivian Andes.

In this market, despite the wind and cold temperatures, some 300 vendors, mostly women, exhibit llama meat -- brought in from rural villages -- on metal grills and wooden tables.

At her market stand, Gladys Guarachi prepares two traditional Bolivian dishes featuring llama: chicharron, which is fried, and fricassee, which is a spicy stew.

"People love it. It's very rich," she told AFP.

There are about 3.7 million heads of llama, a cousin of the alpaca, raised in a region of South America stretching from Ecuador to Argentina -- though the vast majority are in Bolivia and Peru.

According to the UN's Food and Agriculture Organization, nearly 15,000 tons of meat from the camelid family is produced in Bolivia each year.

The meat is low in fat, high in protein and fiber and helps keep cholesterol down, according to a technical study of the Ministry of Rural Development.

But for now, most of the meat is consumed locally, with challenges like sanitation limiting options for international export.

"One of the main problems in growing the llama meat industry is that we need to improve sanitary conditions of production," said Icuna Sixto, union leader of the Anadamarca Producers Union.

He claims there is only one slaughterhouse in Oruro that works under proper sanitary controls, and it processes just a tenth of the animals butchered for sale, while the rest come from private homes without state supervision.

Eco-Friendly Trans-Oceanic Ships in Bolivia
With everything becoming eco-friendly, ships have also caught up in the mood....

Child Workers Suffer Daily for Life in Bolivia
Around 850,000 children in Bolivia are child labors and struggle for their life from a young ......