University of Sydney researcher Dr Jas Singh and his team have tested a punch loaded with anti-oxidants that effectively killed five different cancer cells in mice.

"It was a very significant drop in cell numbers, and we found that the more concentrated the dose (of punch), the greater the reduction in cancer cells," News.com.au quoted Singh, as saying.


Dr Red's owner, biochemist Greg Jardine insisted that he did not intend to make a medicinal product, but wine with thrice the anti-oxidants in standard drinks.

"We recommend 25ml a day, but in the trial they were using three glasses a day," he said.

The punch has a range of anti-oxidant rich ingredients including ginger and turmeric juices, the pulp of oranges, lemons, mandarins and limes, grapes, grape seed and grape skin, as well as tarragon and lots of blueberries.

Brisbane urologists Doctor John Yaxley and Professor Robert Gardiner are now set to conduct human trials in the next few months in partnership with Queensland researchers.

Professor Lindsay Brown, a Queensland researcher insisted that the idea to employ food in tackling tumour was very striking.

"It is so simple, you must wonder why no-one has thought of it. Instead of creating a drug by isolating a single food molecule, why not use a combination of whole foods as a treatment regime," Brown said. 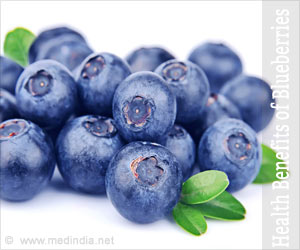 Cancer FactsCancerBerries for a Healthy and Beautiful YouHealth Benefits of Blueberries