Blessings Sought for Their Human Skulls by Bolivians 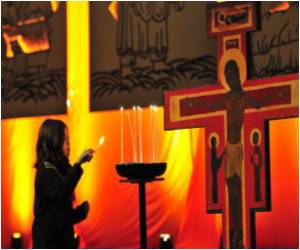 Bolivians crowd local cemeteries every year in early November to display the human skulls they keep at home. The intention is to seek blessings for their beloved craniums.

Part of a centuries-old tradition, many here believe they represent the souls of the dearly departed. If treated kindly and with respect, the skulls will protect families and businesses, and grant wealth and a healthy life.

Stout Andean women wearing long skirts and bowler hats were among the crowd taking their skulls into the cemetery chapel for a blessing.


"I brought her so that she can hear mass and receive a blessing for the favors that she granted us," a woman at a La Paz cemetery chapel told AFP as she carefully clutched her skull, decked out with flowers for the event.
Advertisement
Many were ensconced in a bed of colorful petals in display containers that ranged from simple, open-boxes to fancy glass boxes or wood displays with glass windows.

Because La Paz can be bitter cold at 4,000 meters (13,100 feet) above sea level, many of the skulls sported wool watch caps, berets and chullos, an Andean cap with earflaps.

Many had cotton in their eye sockets and cigarettes in their mouths.

"This tradition has a pre-Hispanic origin," said Felix Mendoza, a professor of Andean theology at the Indigenous Tawantinsuyu University.

Before the Spaniards reached the New World in 1492, residents of the Andes would place the mummified remains of their deceased on litters and take them for a walk "so that the spirits would return to meet their bodies and families again," Mendoza said.

The Catholic Church is uneasy dealing with these pre-Columbian practices. A priest delivered mass at the chapel, but he let an acolyte spray holy water on the skulls.

One of the containers was inscribed "FELC-El Alto (Special Force in the Fight Against Crime), Homicide Division," and held a skull named "Juanito," who its carrier claimed helped solve crimes.

Another believer described the tradition's benefits: "Where there is a skull, thieves and low-lives do not enter."

But the practice is not just for the pure of heart. Criminals are known to take skulls to be blessed as a thank you for keeping the owner out of trouble.

At home, believers place their skulls in a prominent place -- usually a living room -- religiously lighting a candle for them each Friday and placing coca leaves, food or a lit cigarette in their jaws.

Skulls that protect homes usually belong to men. Sometimes they are from a dead relative or are simply dug up from graves. Other skulls have been around for so long nobody knows where they came from.

In the United States, Halloween, the last day of October, is associated with the dead. The following day for Catholics is All Saints Day, a time to honor the deceased.

Mexicans flock to cemeteries every November 1 and 2, bringing flowers and a dead loved one's favorite food and drink.

But in Bolivia it is on November 9 when people bring out their skulls, known here in an endearing way as "natitos," or pug-noses.

After touring the cemetery with their skulls, families go home for boozy parties that can last all night.

France Toughens Ban on Religion in Schools
A new charter is being unveiled by France, which is designed to reinforce rules banning religion ......

Religion Can Dictate Whom You Trust and Whom You Don't
Religious people have more trust in authority, while those with moral convictions feel ......