'Blasphemous' Lord's Prayer To Be Re-worded By French Church 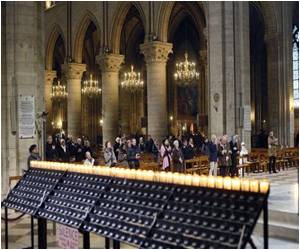 French Catholics have been reciting a version of the Lord's Prayer that could be considered blasphemous for nearly half a century, concludes the country's bishops after years of debate.

In a ruling long advocated by traditionalists and with implications for other-language versions of the prayer, the bishops have approved a new edition of the French-language bible which will include a revised wording of one of the prayer's best-known lines, "Lead us not into temptation."

The existing French version of that line reads, "Et ne nous soumets pas à la tentation", which translates as "Do not submit us to temptation."


This has long been controversial because of the possibility of interpreting it in a way that suggests God has the power to make people succumb to the temptation of sin -- contradicting most orthodox Christian theology which holds that He is infinitely and unchangeably good.
Advertisement
In the revised formulation, to be included in new bibles published on November 22, the line will read "Et ne nous laisse pas entrer en tentation" or "Let us not enter into temptation."

The change was authorised by the Vatican in July along with the rest of a new translation of the bible into French from the original texts, which were written in a number of different languages. The task, involving 70 linguistic and theological experts, has taken 17 years to complete.

The current version of the Lord's Prayer has been used in France since 1966.

Ironically, the disputed wording was the result of an attempt to agree on a common version for both Catholic and Protestant churches. France's small Protestant congregations however never adopted the phrase, opting instead for "Let us not enter into temptation."

Two in Five Americans Read Bible Online in 2012
The number of Americans who read the Bible online has seen a rise in the last year....

World's Oldest Surviving Bible Published On the Internet
About 800 pages of the world's oldest surviving Bible have been pieced together and published on ......