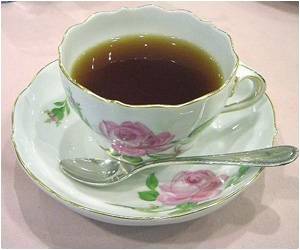 Scientists at The University of Western Australia and Unilever based their findings on drinking black tea and the effect of drinking tea with milk is not known.

Want to know how to lower high blood pressure/hypertension? Garlic is a miracle herb that helps to lower blood pressure and keep it under control.
Advertisement

"There is already mounting evidence that tea is good for your heart health, but this is an important discovery because it demonstrates a link between tea and a major risk factor for heart disease," the Daily Mail quoted lead author Research Professor Jonathan Hodgson as saying.

Top reasons why you should eat fruits to lower blood pressure and reduce the risk of heart disease. Antioxidants in fruits keep your blood pressure under control.
Advertisement
In the study, 95 Australian participants aged between 35 and 75 were asked to drink either three cups of black tea or a placebo with the same flavor and caffeine content, but not derived from tea.

The researchers recorded their readings after six months and found that as compared to the placebo group, participants who drank black tea had a lower systolic and diastolic blood pressure of between 2 and 3 mmHg (millimeters of mercury).

The authors consider that a 2 to 3mmHg drop in blood pressure across the board would lead to a 10 per cent drop in the number of people with hypertension and heart disease.

"A large proportion of the general population has blood pressure within the range included in this trial, making results of the trial applicable to individuals at increased risk of hypertension," Dr Hodgson added.

The study has been published in the Archives of Internal Medicine.

Drug intervention need not be the only option to help lower your moderately high blood pressure. Lifestyle changes along with herb remedies such as garlic, arjuna, sarpagandha, and olive can serve the purpose.
Advertisement
<< Tainted Heart Drugs Claim 100 Lives In Pakistan
New Test Accurately Predicts Death Risk From Lung Cancer >>