Bird Victims of Cuckoo Evolve Signatures on Their Eggs 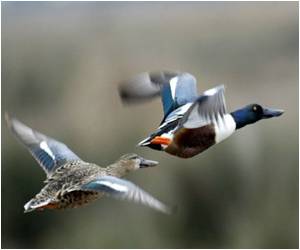 Common cuckoo lays eggs in other birds' nests and for these birds, recognizing one's own eggs can be a matter of life or death. In a new study, researchers from Harvard University and the University of Cambridge show that many birds parasitized by the Common Cuckoo have evolved distinctive pattern signatures on their eggs in order to distinguish them from those laid by a cuckoo cheat. The study reveals that these signatures provide a powerful defense against cuckoo trickery, helping host birds to reject cuckoo eggs before they hatch and destroy the host's own brood.

To determine how a bird brain might perceive and recognize complex pattern information, Dr. Mary Caswell Stoddard at Harvard University and Dr. Rebecca Kilner and Dr. Christopher Town at the University of Cambridge developed a novel computer vision tool, NATUREPATTERNMATCH. The tool extracts and compares recognizable features in visual scenes, working in a way that approximates processes known to be important for recognition tasks in vertebrates.

From Fish to Man

"We harnessed the same computer technology used for diverse pattern recognition tasks, like face recognition and image stitching, to determine what visual features on a bird's eggs might be easily recognized," explained Dr. Stoddard.


Using the tool, the researchers studied the pigmentation patterns on hundreds of eggs laid by eight different bird species (hosts) targeted by the Common Cuckoo. They discovered that some hosts, like the Brambling, have evolved highly recognizable egg patterns characterized by distinctive blotches and markings. By contrast, other hosts have failed to evolve recognizable egg patterns, instead laying eggs with few identifiable markings. Those hosts with the best signatures, the researchers found, are those that have been subjected to the most intense cuckoo mimicry.

More to the Hormones Than Meets the Eye

Women are attractive and more so during the peak fertile stage of the month. During this period, she looks appealing to men and is often rated attractive by them
Advertisement
The Common Cuckoo and its hosts are locked in different stages of a coevolutionary arms race. If a particular host species - over evolutionary time - develops the ability to reject foreign cuckoo eggs, the cuckoo improves its ability lay eggs that closely match the color and patterning of those laid by its host.

"The ability of Common Cuckoos to mimic the appearance of many of their hosts' eggs has been known for centuries. The astonishing finding here is that hosts can fight back against cuckoo mimicry by evolving highly recognizable patterns on their own eggs, just like a bank might insert watermarks on its currency to deter counterfeiters," said Dr. Stoddard.

The patterns on bird eggs are just one type of visual signature. Identity signatures are common in the animal world, but how they are encoded and recognized is poorly understood. In the future, computational tools like NATUREPATTERNMATCH, which account for important aspects of visual and cognitive processing, will be crucial for understanding the evolution of visual signals in diverse taxa.

The findings of this study are reported June 18 in the journal Nature Communications.

Details to the Story of Evolution With Butterfly 'Eyespots'

The colourful eyespots on the wings of some butterfly species have been found to address fundamental questions about evolution, including Aristotle's famous chicken or the egg .
Advertisement
<< Racial Differences in Sentinel Lymph Node Biopsy in Women W...
Bipolar Disorder Affects Brains of Children and Adults Diff... >>

Accident and Trauma Care Hearing Loss Calculator The Essence of Yoga Vent Forte (Theophylline) Indian Medical Journals Iron Intake Calculator Nutam (400mg) (Piracetam) Find a Doctor Sanatogen Find a Hospital
This site uses cookies to deliver our services. By using our site, you acknowledge that you have read and understand our Cookie Policy, Privacy Policy, and our Terms of Use