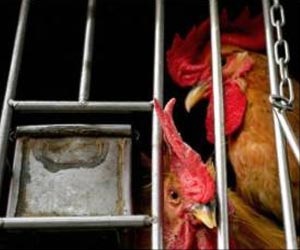 Bird flu is posing a major threat not only to the birds but also to the poultry business in Madhya Pradesh, India. Overall, bird flu has spread to 75 percent of the districts in the state.

It has been confirmed in crows and other wild birds in 32 out of the 52 state districts, while the infection has been reportedly found in poultry products in three districts.

Coronavirus is still prevalent in the state, but people breathed a sigh of relief after vaccines were found. Now there is an outbreak of bird flu and the fear of its subsequent expansion. While crows and wild birds continue to die, the poultry business has also not remained untouched by bird flu, leading to concerns over the industry.


Madhya Pradesh Animal Husbandry Minister Prem Singh Patel has instructed the districts unaffected by bird flu to increase vigilance. He said the deaths of crows has led to the outbreak of bird flu which has now spread to 32 districts, including the poultry business in three districts.

Patel said the culling of chickens infected with the virus in poultry markets in Jhabua, Harda and Mandsaur has been done according to the advisory issued by the Centre.

The bird flu was also confirmed at Kadaknath in Jhabua district and a large number of poultry products have been destroyed. The chicks from Kadaknath were to be supplied to the farmhouse of former Indian cricketer Mahendra Singh Dhoni.

It is a big challenge to stop bird flu from spreading. This is the reason that the state Animal Husbandry Minister has appealed to the poultry farmers in the unaffected districts to be vigilant and immediately inform the control room of their district as soon as they get information about unnatural deaths of birds or chickens.

The Minister said the reservoirs and sanctuaries in the state should be strictly monitored. To deal with untoward situations, PPE kits, disinfectants, necessary equipment and medicines should be kept ready.

So far 3,890 crows and wild birds have died in the state. As many as 453 samples from various districts have been sent to the National Institute of High Security Animal Diseases in Bhopal for examination. Bird flu control measures and surveillance are going on in the affected districts.

Bird flu outbreak in Rajasthan: 140 more crows have died in six districts of the state, stated officials. Of these, 35 crows died in Sawai Madhopur.
Advertisement
<< Brain Waves Help Answer The Question Of Where Do Our Minds W...
Moderna's Covid Vaccine Under Probe for Allergic Reactions >>

Uttar Pradesh in India has been put on high alert over bird flu. The government has given strict instructions in all the districts to start culling infected birds even if a single case is reported.