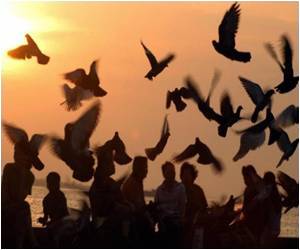 After reports of large number of crows dying from bird flu, Bihar on Sunday sounded an alert of possible spread of avian influenza.

The health department has directed all district civil surgeons to keep in touch with the district animal husbandry department and follow the advise of its director.

"The civil surgeons have been asked to prepare and keep a rapid response team to meet an influenza breakout and report unnatural human deaths immediately," a health department official said.


Last week, it was revealed in a report of the Bhopal-based High Security Animal Disease Laboratory (HSADL) that crows are dying in Bihar because of bird flu.

It might not be the plague yet, but the bird or avian flu scare has acquired this nasty habit of sending a shiver down the spine.
Advertisement
The HSADL confirmed the deaths in Gaya district.

The Bihar government then directed the animal husbandry department to take steps to deal with the situation.

Hundreds of crows have died in Bihar in the last one and a half months, particularly in Gaya, Banka, Nawada, Jamui, Bhagalpur, Munger and Aurangabad districts.

The Bihar Animal Husbandry Department has asked people not to touch the dead crows. It has issued advertisements in local dailies asking people to alert the administration if they spot any dead crows.

Bird flu is believed to be a rare disease that kills more than half of the people it infects, but a US study out Thursday suggests it may be more common and less lethal than previously thought.
Advertisement
Advertisement