Bioethicists Call for Return to Asylums for Long-Term Psychiatric Care 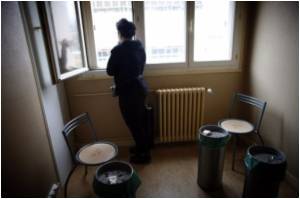 As the United States population has doubled since 1955, the number of inpatient psychiatric beds in U.S. has been cut by nearly 95 percent to just 45,000.

It is a wholly inadequate equation when considering that there are currently 10 million U.S. residents with serious mental illness. A new viewpoint in JAMA, written by Dominic Sisti, PhD, Andrea Segal, MS, and Ezekiel Emanuel, MD, PhD, of the department of Medical Ethics and Health Policy in the Perelman School of Medicine at the University of Pennsylvania, looks at the evolution away from inpatient psychiatric beds, evaluates the current system for housing and treating the mentally ill, and then suggests a modern approach to institutionalized mental health care as a solution.

"For the past 60 years or more, social, political and economic forces coalesced to move severely mentally ill patients out of psychiatric hospitals," write the authors. They say the civil rights movement propelled deinstitutionalization, reports of hospital abuse offended public consciousness, and new drugs gave patients independence. In addition, economics and federal policies accelerated the transformation because outpatient therapy and drug treatment were less expensive than inpatient care, and the federal legislation like the Community Mental Health Centers Act and Medicaid led to states closing or limiting the size of so-called institutions for mental diseases.


However, the authors write, "deinstitutionalization has really been transinstitutionalization." Some patients with chronic psychiatric diseases were moved to nursing homes or hospitals. Others became homeless, utilizing hospital emergency departments for both care and housing. But "most disturbingly, U.S. jails and prisons have become the nation's largest mental health care facilities. Half of all inmates have a mental illness or substance abuse disorder; 15 percent of state inmates are diagnosed with a psychotic disorder." According to the authors, "this results in a vicious cycle whereby mentally ill patients move between crisis hospitalization, homelessness and incarceration."

A new study says that pediatric patients are increasingly receiving psychiatric care in hospital emergency departments (EDs).
Advertisement
Instead, the authors suggest that a better option for the severely and chronically mentally ill, and the most "financially sensible and morally appropriate way forward includes a return to psychiatric asylums that are safe, modern and humane." They argue that the term 'aslyum' should be understood in its original sense - a place of safety, sanctuary and healing.

"Asylums are a necessary, but not sufficient component of a reformed spectrum of psychiatric services," write the authors. Reforms need to expand the role of these institutions to address a full range of integrated psychiatric treatment services - from providing care to patients who cannot live alone or are a danger to themselves and others, to providing care to patients with milder forms of mental illness who can thrive with high-quality outpatient care. These fully-integrated, patient-centered facilities do exist in the U.S. today, but more are needed to provide 21st century care to patients with chronic, serious mental illness.

Penn Medicine is one of the world's leading academic medical centers, dedicated to the related missions of medical education, biomedical research, and excellence in patient care. Penn Medicine consists of the Raymond and Ruth Perelman School of Medicine at the University of Pennsylvania (founded in 1765 as the nation's first medical school) and the University of Pennsylvania Health System, which together form a $4.3 billion enterprise.

The Perelman School of Medicine has been ranked among the top five medical schools in the United States for the past 17 years, according to U.S. News & World Report's survey of research-oriented medical schools. The School is consistently among the nation's top recipients of funding from the National Institutes of Health, with $392 million awarded in the 2013 fiscal year.

Penn Medicine is committed to improving lives and health through a variety of community-based programs and activities. In fiscal year 2013, Penn Medicine provided $814 million to benefit our community.

Children from poorer families in US seem to be increasingly turning to emergency departments in hospitals for psychiatric care.
Advertisement
<< Ebola Virus Changes Over Time, may Thwart Drugs
Need to Address Problems Arising Out of Carbon Dioxide Emis... >>