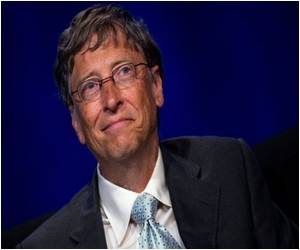 Bill Gates announced his decision to donate $1.8 billion to the Global Polio Eradication Initiative, which makes up for one third of the total funds required.

"There has been a total of four billion dollars raised here. That gives us 73 percent of" the $5.5 billion needed, he said.

The number of worldwide polio infections plunged to 223 in 2012, compared to 360,000 in 1988 when the United Nations launched a campaign to eliminate the highly contagious and crippling illness.

Nigeria, where an Islamist insurgency in the country's north has taken a hit on immunisation campaigns and at least 10 people were killed in attacks on two vaccination centres in February, saw most of the cases in 2012.

At least 20 people have been killed in such attacks in Pakistan since December.

Gates, listed by Forbes as the world's second-richest person, had said the global campaign to eliminate polio was currently spending about $900 million a year.

But Medecins Sans Frontiers (MSF) has criticised the high prices of the vaccines.

"High prices for new vaccines could put developing countries in the precarious situation of not being able to afford to fully vaccinate their children in the future," warned the medical charity.

"Urgent action is needed to address the skyrocketing price to vaccinate a child, which has risen by 2,700 percent over the last decade," said Dr Manica Balasegaram, executive director of MSF's Access Campaign.

"The lack of transparency by companies on vaccine manufacturing costs and their focus on profits above ensuring sustainable prices for vaccines for low-income countries are at the root of the problem," she said.

The Bill and Melinda Gates Foundation is a major contributor to the GAVI Alliance, which helps make vaccines available to developing countries.

The two-day Global Vaccine Summit was aimed at highlighting the need for continued support for immunisations, as well as discuss a six-year plan to eliminate polio.

Need for Digital Revolution Against Hunger: Bill Gates
A digital revolution has been urged by Microsoft founder Bill Gates in order to alleviate world .....

Bill Gates Visits West Africa
In the West African heat, the freckled man with the rectangular glasses instantly recognisable to .....

On A Mission to Rid World of Polio by 2018 Is Bill Gates
Polio could be eradicated throughout the world by 2018 said Microsoft founder Bill Gates....