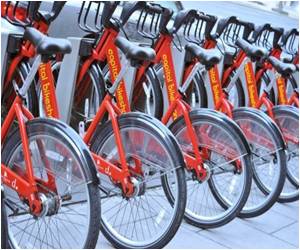 Ten months behind schedule, New York City on Monday launched what aims to be one of the world's biggest bike share programs, following in the path already taken by Paris, Montreal, London and Barcelona.

New Yorkers will now be able to move around on the 6,000 blue "Citi Bikes" distributed among 333 stations in Manhattan and Brooklyn -- the first phase of a network that is supposed to grow to 10,000 bikes at 600 stations.

Light traffic because of the Memorial Day holiday made for ideal conditions to try out the new subscription-based service on quiet city streets.


About 14,000 New Yorkers have paid an annual $103 fee entitling them to unlimited rides of 45 minutes. Daily and weekly plans will be available as well from June 2.
Advertisement
Alex Nash, who pedaled into Union Square on his first "Citi bike" ride at 8:30 am, said he was delighted by the experience despite some glitches.

"To start with, it was a little bit difficult to put it back. I couldn't get a new one. But it's great. I love it," the software engineer said.

He said he wants to use the bike share program every day to get around Manhattan.

The roll-out, which has caused changes in traffic patterns and in the urban landscape, have caused some grumbling among New Yorkers who have seen parking places disappear and complain the bike racks look ugly.

And there is raging debate over the risks posed by a higher degree of road sharing among cars and bikes in a city not known for patience.

The initiative operates under the same basic scheme adopted in other cities with bike share programs, with users offered daily, weekly and annual plans at varying rates for unlimited 30 to 45 minute rides. There is a charge for rides that last longer.

The program was supposed to have begun in July 2012 but it was postponed twice, initially for logistical reasons, and later because some equipment suffered flood damage during Superstorm Sandy in October.

Rate of Bicycle-related Fatalities Significantly Lower in States With Helmet Laws: Research
Bicyclists who wear helmets have an 88 percent lower risk of brain injury according to existing ......

Reflector Technology in Footwear and Bicycle Helps in Detecting Bioterror Threats
Researchers are using smaller versions of reflectors found in sneakers and bicycle fenders to ......