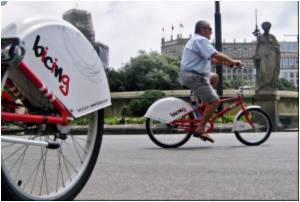 An unusual research by Dutch doctors have found a way to diagnose Parkinson's disease. Neurologists examining the patients should ask them to ride a bike which may help to determine whether they are suffering from atypical or "regular" Parkinson's disease.

Distinguishing between patients with Parkinson's and those with a disorder known as atypical parkinsonism is important as the two conditions have different causes and treatments.

They share a set of shared symptoms, including limb tremor, slowed movement, muscle rigidity and unsteadiness -- and sometimes even advanced medical technology is unable to make an early distinction.


But, say researchers at the Parkinson Centre in Nijmegen, an effective, non-disruptive, low-cost diagnostic tool is this: can the patient ride a bike?

Slide animation on surgery for Parkinson disease. Surgery is only indicated where drugs fail to control the symptoms of this progressive movement disorder. Surgery cannot cure the disease.
Advertisement
It may seem counter-intuitive, but people with "regular" Parkinson's often have a remarkable ability to ride a bike, as they have few problems with sideways balance and with the short, rhythmic movements needed to pedal, the doctors said in a letter published on Friday by The Lancet.

This task, though, is often too demanding for people with atypical parkinsonism, the umbrella term for half a dozen syndromes such as progressive supranuclear palsy, multiple system atrophy and corticobasal degeneration.

Parkinson's disease comes from the death of cells in a key part of the brain called the substantia nigra that produce a neurotransmitter chemical called dopamine.

The standard treatment is a drug called levodopa, which the brain converts into dopamine. But the treatment does not work effectively, or may not even work at all, in atypical parkinsonism.

The Nijmegen doctors tested their theory on 111 patients with Parkinson-like symptoms and who were able to ride a bike at the start of the study.

Afterwards, 45 of the patients went on to be confirmed as having Parkinson's and 64 as having atypical parkinsonism.

During the 30 months that they were under study, two of the 45 later found to have Parkinson's stopped riding a bike, but the tally was 34 out of the 64 who were eventually diagnosed with the "atypical" disease.

"We suggest that the loss of the ability to cycle after disease onset might serve as a new red flag, signalling the presence of atypical parkinsonism," said the letter.

The Central nervous system consists of the brain, the spinal cord, and the body's nerve network. This complex system is based on one kind of cell the neurons.
Advertisement
Advertisement