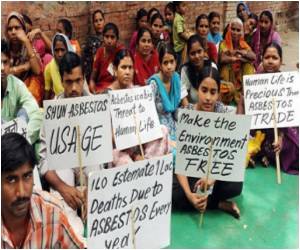 Bihar government has been issued a notice by the Environment ministry for giving permission for setting up 12 plants for manufacturing asbestos laden cement roofing sheets, in the Muzaffarnagar district. These plants that are based on Chrysotile (white asbestos) pose huge public health risk. White asbestos in any form could be carcinogenic and occupational and non-occupational exposure is associated with mesothelioma and other malignancies.

Ahmedabad based National Institute of Occupational Health (NIOH) has been asked to study the environmental and health impacts of asbestos on the workers and those living in the vicinity. The reports are yet to be submitted.

The harmful and deadly effects that asbestos fibres may cause may have been seriously underestimated, medical researchers have revealed.
Advertisement
Advertisement

Mesothelioma is a rare, aggressive and deadly cancer of the mesothelial tissue lining the internal organs and ...