Big Business for Mozart's Salzburg in 'Sound of Music' 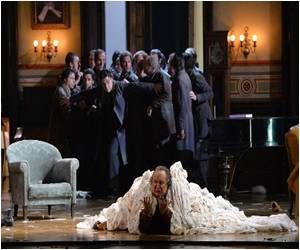 "The Sound of Music" has captured the imagination of movie-goers and musical fans with its catchy tunes and lovable characters amidst the stunning Austrian Alps, for almost 50 years.

And this has proven to be big business for the city of Salzburg, where the real-life singing von Trapp family lived and the 1965 Hollywood movie was filmed.

Watch a Favourite Movie During Surgery and Enjoy

Methods to deal with the anxiety of a surgery may have just got evolved, giving a break to dreary anaesthetic face masks and backless hospital gowns.
Advertisement

While Mozart and classical music remain the city's main tourist attractions, half of all visitors who come here every year from the US, Britain, Canada and Asia make the trip because of "The Sound of Music", according to the tourism office.

What is the idea behind music as a healing therapy? The position of Indian classical music in this genre of healing, though proven through the ages, has not been written about as much as it ought to.
Advertisement
"It's the most successful location placement in film history," he said.

Bus tours take visitors around the movie's locations twice a day, "Sound of Music" dinner-and-concert evenings are organised regularly and the Salzburg puppet theatre has even created its own version of the musical.

But Austria itself was slow to catch on to this worldwide craze.

The story of the von Trapp family was made into several German-language films here in the 1950s and was widely known locally.

But the 1959 Broadway musical, on which the Hollywood version was based, only premiered in Vienna in 2005 and in Salzburg in 2011 -- to great success.

Even now, asking a Salzburg resident where one might find the "Do-Re-Mi" steps -- where Maria von Trapp teaches the children how to sing in the movie -- is likely to provoke a bemused reaction.

For a Mozart-obsessed city, which prides itself on its prestigious music festival: "It just brings diversity... I think it adds to the greatness of Salzburg," said Keijo Halinen, from Finland, who joined one of the "Sound of Music" tours with his wife Monica.

Every day, dozens of tourists of all ages and nationalities jump on a bus to see the romantic gazebo where Liesl sang "Sixteen going on Seventeen," the church in Mondsee where the famous wedding scene took place and Leopoldskron Palace, where the lake scenes at the Trapp villa were filmed.

On the way, many sing along to the well-known music by the American partners Richard Rodgers and Oscar Hammerstein.

"It's a family film. We've had visitors who were first here backpacking, then came with their wife, later with their children and today they come with their grandchildren," said Stefan Herzl, who organises the Original Sound of Music Tour.

The breathtaking countryside of green hillsides and deep blue mountain lakes adds to the magic for visitors, touring not just film locations but the city where the real von Trapps lived.

"We probably wouldn't have come here if it wasn't for this to be honest... 'The Sound of Music' was a massive draw," said Matt Preston from London, who opted for the tour rather than visit Mozart's birthplace.

"Something about the movie captures audiences' attention. It's magical. Just seeing the beautiful scenery, the Alps, it's very heartwarming," added Jennifer, a recent university graduate from Austin, Texas, who was taking the tour for a second time.

With new stage productions popping up every year including in China, Japan and India, interest in "The Sound of Music" shows no sign of letting up. A live TV special in the US last December and a televised casting show in Britain in 2006 drew millions of viewers.

This is good news for Salzburg's tourism office, which uses new productions of the musical whenever it can to sell the city abroad as a travel destination.

With the movie turning 50 next year, Salzburg is already in talks with 20th Century Fox and the estate of Rodgers and Hammerstein to bring back the cast of the movie and organise a special tribute.

"The story with 'The Sound of Music' is obviously nowhere near ending," said tourism director Brugger.

From infants to the infirm, music's appeal is universal and nonpareil, wafting its way to the heart! Get cured by music therapy and feel overwhelmed
Advertisement
Advertisement