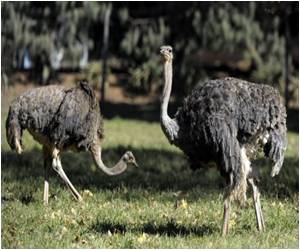 Penis gets enlarged by lymph fluid available in body tissues in large birds such as the ostriches, unlike blood impacting enlargement in humans, reveals a new study.

Most of the birds reproduce with a 'cloacal kiss' - touching together their cloaca for long enough for sperm to transfer from the males to the females.

The cloaca is a single opening through which urine and faeces are excreted but certain species like ducks, geese, swans and flamingos also have a penis.


In birds, this reproductive organ is unusual as it is enlarged by lymph: the fluid found in bodily tissues, the BBC reported.

But the ratite family, from large ostriches to small kiwis, were considered to be an exception to this rule.
Advertisement
"Earlier reports form the late 19th Century had suggested that the ostrich had a blood vascular erection mechanism, while no data existed for the emu or rhea," said Dr Patricia Brennan who co-authored the study.

"Since all other birds with penises have lymphatic erection mechanisms, I always thought that it was strange that the ostrich would be blood vascular."

To unravel the truth, Dr Brennan and her team closely examined the penis of a male ostrich and three male emus and found some key differences.

"The penis of the ostrich is fundamentally very different from emu and rhea because it is made out of a dense collagen matrix, but the lymphatic machinery is all there."Ostriches do have blood vessels near the surface of the penis, that makes it look pink, but the inside of the penis fills up with lymph, not blood."

Dr Brennan asserted that the proof verifies the fact that "the lymphatic erection mechanism evolved in the ancestor of birds".

"The reason why the change between blood vascular and lymphatic took place remains a mystery."

"The lymphatic system is a low pressure system, so this means that erection cannot be maintained, and this has some important implications for how birds actually copulate," Dr Brennan added.

The study has been published in the Journal of Zoology.

Priapism
Priapism is persistent painful erection that lasts for more than four hours and is unrelated to ......