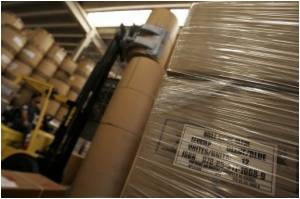 The microfilm Bible that was on the Apollo 13 mission as it flew round the moon, and also landed on the moon's surface with Apollo 14, has fetched over $75,000 in an auction of space memorabilia in Dallas.

The 1.5 inch by 1.5 inch "Lunar Bible," which can be read with a microscope, is one of 12 complete Bibles that remain from a collection of 100 Bibles which made it to the moon's surface with astronaut Edgar Mitchell in 1971, the New York Daily News reported.

A new survey has revealed that Harry Potter, Fifty Shades of Grey and The Bible have been named the most popular books of all time in British households.
Advertisement

Michael Riley, senior historian for Heritage Auctions said that this tiny microform contains the complete Bible, all 1,245 pages of the King James Bible, both Old and New Testaments.


The Bibles were produced by the Apollo Prayer League, a group started by NASA employees and spread globally with the idea of using man's first trip to the moon to carry the words of God, the auction house said.

The number of Americans who read the Bible online has seen a rise in the last year.
Advertisement
Apollo 13 commander Jim Lovell carried 512 of the stamp-sized Bibles on the 1970 mission that was supposed to land on the moon but did not after an oxygen tank explosion in flight severely damaged the spacecraft.

Most of those bibles were cut into pieces and distributed to dignitaries over the years.

Twelve of those that remained passed from John Stout of the Prayer League to astronaut Mitchell.

Following a reprimand from the Roman pontiff himself, The pilgrims and tourists who flock to St Peter's Square every week to see Pope Francis will get pocket bibles.
Advertisement
<< Sugar Found to Increase Risk of Heart Disease
Male Infertility Linked to Mortality: Study >>