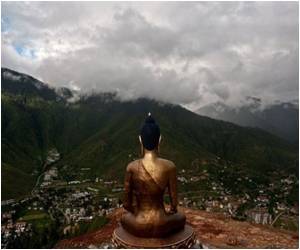 Bhutan, the Himalayan kingdom which is famed for seeking "happiness" for its citizens is aiming to become the first nation in the world to turn its home-grown food and farmers 100 percent organic.

The tiny Buddhist-majority nation wedged between China and India has an unusual and some say enviable approach to economic development, centred on protecting the environment and focusing on mental well-being.

Bhutan's newly-married king and his 21-year-old bride greeted huge crowds of well-wishers on Friday as they made their way on foot back to the capital along windy Himalayan roads.
Advertisement

Its development model measuring "Gross National Happiness" instead of Gross Domestic Product (GDP) has been discussed at the United Nations and has been publicly backed by leaders from Britain and France, among others.


It banned television until 1999, keeps out mass tourism to shield its culture from foreign influence, and most recently set up a weekly "pedestrians' day" on Tuesdays that sees cars banned from town centres.

Bhutan introduces weekly 'pedestrian day' with motorists banned from town centres.
Advertisement
Its determination to chart a different path can be seen in its new policy to phase out artificial chemicals in farming in the next 10 years, making its staple foods of wheat and potatoes, as well as its fruits, 100 percent organic.

"Bhutan has decided to go for a green economy in light of the tremendous pressure we are exerting on the planet," Agriculture Minister Pema Gyamtsho told AFP in an interview by telephone from the capital Thimphu.

"If you go for very intensive agriculture it would imply the use of so many chemicals, which is not in keeping with our belief in Buddhism, which calls for us to live in harmony with nature."

Bhutan has a population of just over 700,000, two-thirds of whom depend on farming in villages dotted around fertile southern plains near India and the soaring Himalayan peaks and deep valleys to the north.

Overwhelmingly forested, no more than three percent of the country's land area is used for growing crops, says Gyamtsho, with the majority of farmers already organic and reliant on rotting leaves or compost as a natural fertiliser.

"Only farmers in areas that are accessible by roads or have easy transport have access to chemicals," he explained, saying chemical use was already "very low" by international standards.

In the large valleys, such as the one cradling the sleepy capital Thimphu, chemicals are used to kill a local weed that is difficult to take out by hand -- a challenge compounded by a lack of farm labour.

Elsewhere, the fertiliser urea is sometimes added to soil, while a fungicide to control leaf rust on wheat is also available.

"We have developed a strategy that is step-by-step. We cannot go organic overnight," Gyamtsho said, describing a policy and roadmap which were formally adopted by the government last year.

Bhutan's only competitor for the first "100 percent organic" title is the tiny self-governing island of Niue in the South Pacific, which has a population of only 1,300. It aims to reach its objective by 2015-2020.

Nadia Scialabba, a global specialist on organic farming at the UN's Food and Agriculture Organisation, says the organic food market and its premium prices are attractive for small countries and territories.

"This is happening in very small countries who are not competitive on quantity, but they would like to be competitive in quality," she told AFP.

Bhutan sends rare mushrooms to Japan, vegetables to upmarket hotels in Thailand, its highly-prized apples to India and elsewhere, as well as red rice to the United States.

By shunning fertilisers and other chemicals, the country also stands to gain by reducing its import bill -- a particular concern for a country short on foreign currency.

"Because there won't be pesticides or other chemicals on sale in the kingdom, they would be able to offer a high level of guarantees that products are organic," Melchett explained.

In countries like Spain, for example, there is a problem of contamination when organic farms are next to highly industrialised producers using large quantities of artificial chemicals, Melchett said.

"It's difficult for organic farmers in those circumstances to keep their crops and supply-chain free of contamination."

Bhutan's organic policy would "start to give the country a reputation of high quality organic food which in the long-run would give them a market advantage and the possibility of price premiums," he added.

Jurmi Dorji, a member of the 103-strong Daga Shingdrey Pshogpa farmers' association in southern Bhutan, says his fellow members are in favour of the policy.

"More than a decade ago, people realised that the chemicals were not good for farming," he told AFP. "I cannot say everyone has stopped using chemicals but almost 90 percent have."

Bhutan's rare form of polygamy, in which men or women take several sisters or brothers as partners, is dying out as the kingdom modernises, with this week's royal wedding another sign of its demise.
Advertisement
<< Unnecessary Care As Cost Put At $800bn A Year
Rare Infection Causes Heart Failure for Sixteen Year Old Gi... >>

Hepatitis B Cases Rising in Bhutan

Iron Intake Calculator Find a Doctor Vent Forte (Theophylline) The Essence of Yoga Loram (2 mg) (Lorazepam) Color Blindness Calculator Selfie Addiction Calculator Drug Side Effects Calculator Blood Pressure Calculator Pregnancy Confirmation Calculator
This site uses cookies to deliver our services. By using our site, you acknowledge that you have read and understand our Cookie Policy, Privacy Policy, and our Terms of Use