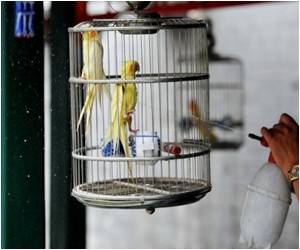 The black stripe across her breast and white patches on her cheeks correlate to a chick's weight at two weeks and immune strength respectively - though the former seems to signal a genetic benefit and the latter can affect an 'adopted' chick's health, suggesting nurture is involved.

Taking two mothers with different patterning, and swapping their chicks, researchers from Palacky University in the Czech Republic were able to investigate the growth and health of the infants and the "ornamentation" of their mothers.


They compared the offspring's weight, size and immune strength and found a correlation between the chick's weight at two weeks and the size of black breast stripe on the genetic mother.
Advertisement
The immaculateness of both genetic and foster mother's white cheek patch was related to the strength of chick's immune response suggesting that this was due to both nurture and genetics.

In these socially monogamous birds both the males and females are brightly coloured, however neither the cheek patch nor the stripe in males affected the health of the babies.

Talking about how the ornaments can have evolved to signal reproductive fitness, Vladimir Remes and Beata Matysiokova who performed this study explained, "Bigger healthier babies are important to the reproductive success of individuals, because they are more likely to survive to adulthood - so it is useful for birds to be able to work out which potential mates will produce the best babies."

"Maintaining bright colouration uses up resources which could otherwise be invested in reproduction or self-maintenance - consequently the evolution and maintenance of ornamentation in female great tits is probably due to direct selection by males," they said.

The study is published in BioMed Central's open access journal Frontiers in Zoology.

Human Speech and Bird Song - The Dopamine Link
Striking similarity has been found in the gene activity for human speech and bird song, according .....

City Birds Sing at Higher Pitch to Drown Out Traffic Sounds
One of the major reasons why birds in the city sing at a high pitch is to ensure that they are able ...