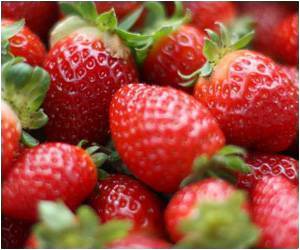 The protective effect of berries against inflammation has been documented in many studies. Diets supplemented with blueberries and strawberries have also been shown to improve behavior and cognitive functions in stressed young rats.

To evaluate the protective effects of berries on brain function, specifically the ability of the brain to clear toxic accumulation, researchers from the Human Nutrition Research Center on Aging at Tufts University and University of Maryland Baltimore County recently fed rats a berry diet for 2 months and then looked at their brains after irradiation, a model for accelerated aging.


All of the rats were fed berries 2 months prior to radiation and then divided into two groups- one was evaluated after 36 hours of radiation and the other after 30 days.
Advertisement
"After 30 days on the same berry diet, the rats experienced significant protection against radiation compared to control," said investigator Shibu Poulose, PhD.

"We saw significant benefits to diets with both of the berries, and speculate it is due to the phytonutrients present," he noted.

The researchers looked at neurochemical changes in the brain, in particular what is known as autophagy, which can regulate the synthesis, degradation and recycling of cellular components. It is also the way in which the brain clears toxic accumulations.

"Most diseases of the brain such as Alzheimer's and Parkinson's have shown an increased amount of toxic protein. Berries seem to promote autophagy, the brain's natural housekeeping mechanism, thereby reducing the toxic accumulation," said Poulose.

The researchers are currently conducting a human study in older people ages 60-75.

"We have a lot of animal work that suggests these compounds will protect the aged brain and reverse some of behavioral deficits. We are hoping it will translate to human studies as well," said Dr. Barbara Shukitt-Hale, the lead investigator conducting the human study.

More News on:
Acai Berry - Does It Really Work? Berries for a Healthy and Beautiful You Fat-Burning Foods for Men

Study Says Health Benefits of Some Berries Don't Get Past Mouth
New study conducted by researchers has raised question mark over health benefits of some of the ......