Bengal Government and Opposition in Disagreement On Dengue Toll 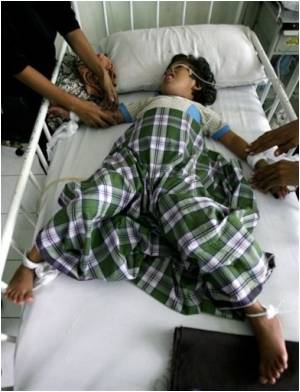 As dengue cases continued to climb,the Trinamool Congress-led government and the opposition continued to spat on the toll while an angry Chief Minister Mamata Banerjee Monday asked the media not to carry out "false propaganda" on the issue.

"As per my reports, only three people have died. Don't carry out false propaganda on the matter. I shall collect all facts and brief you on Tuesday," Banerjee, also the state health minister, told media persons at the state secretariat, Writers' Buildings.


However, contesting the chief minister's figures, Leader of the Opposition Surjya Kanta Mishra of the Communist Party of India-Marxist said the disease has claimed 21 lives.

In a surprising statement, a state minister observed that the government has nothing to do to stop the spread of dengue as the outbreak was governed by "nature's law".

"The government has nothing to do to stop spreading of dengue as the outbreak is controlled by the nature's law," Urban Development Minister Firhad Hakim said here.

Going a step further, a Trinamool lawmaker Nirmal Majhi accused the corporate hospitals of making money by spreading panic on the disease.

"Many of the cases of so-called dengue were actually cases of only viral fever. It is a ploy on the part of the corporates to mint money by spreading panic," said Majhi, himself a doctor.

Taking a dig at the government, Mishra said the government must find out the areas from where the epidemic was spreading and initiate actions to stop it.

"The total number of dengue casualties is 21," he said.

"The government must take measures on war footing to prevent the outbreak of dengue," he added.

Mishra also described as "irresponsible" the chief minister's comment that "false propaganda" was being carried on the issue.

Meanwhile, according to the health department, the number of confirmed dengue cases in the state has shot up to 660 Monday, with 80 percent of the patients residing in Kolkata and its adjoining North 24 Parganas district.

The health department maintained that the loss of lives from the disease was only three, and said four other deaths reported were not due to dengue.

Sanatogen Drug Side Effects Calculator Pregnancy Confirmation Calculator Calculate Ideal Weight for Infants Color Blindness Calculator Find a Hospital Blood - Sugar Chart Iron Intake Calculator The Essence of Yoga Noscaphene (Noscapine)
This site uses cookies to deliver our services. By using our site, you acknowledge that you have read and understand our Cookie Policy, Privacy Policy, and our Terms of Use