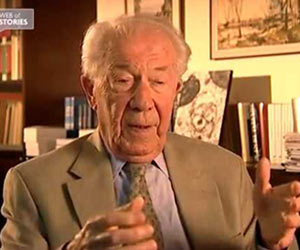 Biochemist Christian de Duve who won Nobel prize in medicine has died in an act of euthanasia at the age of 95, say sources.

De duve, who won the Nobel Prize for cancer research in 1974, was the second famous Belgian who chose mercy killing as a way to die, following in the footsteps of writer Hugo Claus, who died in similar circumstances in 2008, the Sydney Morning Herald reports.

De Duve said a month back that he was not afraid of what befell him as he is not a believer.


The biochemist's decision was firm and final and he was only awaiting his son's arrival from the United States to commit euthanasia in the presence of his entire family.

De Duve's daughter Francoise said her father had refused to take anti-anxiety pills after he suffered a fall in his home and left them in peace.

Belgium is the second country after Netherlands to legalize euthanasia in 2002, the report added.

Euthanasia : Merciful Termination
Euthanasia is defined as 'the intentional killing by act or omission of a dependant human being for ...

In 'Exceptional' Cases Euthanasia Should Be Permitted: French Medical Body
Euthanasia should be allowed in exceptional cases and when suffering patients make "persistent and ....

Belgium Seeks Change in Euthanasia Law to Help Minors, Alzheimer's Sufferers
Belgium's euthanasia law could be heading for significant change that would allow minors and ......