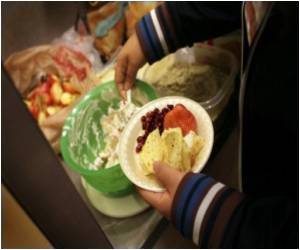 Unhealthy eating patterns may be more common among young parents with children under five years old, than their peers who have no children, according to new research at Minnesota.

The study, led by Jerica M. Berge of the University of Minnesota Medical School is based on surveys of more than 1,520 young adults taken between 1998, when they were juniors and seniors in high school, and 2009, when they were in their mid-twenties, and 149 of them had at least one child.

Tracking their eating habits from the time they were adolescents till they became first-time parents was revealing and practical since if they could be guided to make sensible eating choices and maintain their good health during this challenging time period when they are first-time parents, they would have learnt to handle later health issues through a healthy diet and also, be a good example for their children.


The researchers compared the dietary intake, physical activity and body mass index of parents of children younger than 5 years old with those of adults the same age without children. They discovered that although mothers ate about the same amount of fruit, whole grains and fiber as women without children, they consumed more sugar-sweetened beverages, saturated fat and total calories. They exercised less, too, and consequently weighed more.

Easy to understand info & tips with diagrams about vitamin supplements like vitamin C, B6, B9 & B12. Latest research news on each vitamin's benefits and drawbacks for better consumer understanding.
Advertisement
The researchers concluded that although they knew the value of good nutrition and exercise, new mothers just do not have the time to prepare a healthy meal for themselves or to go back to their exercise regimen. They may also have retained weight from pregnancy, causing them to have a higher body mass index than childless women.   As Dr. Christopher Balgobin, a Fairview family doctor in Apple Valley says pregnant women often lose their motivation to stick to rigid diets and exercise after they give birth.

Although new fathers are also less physically active, there are few differences between men who have children and those who don't.